The designation was implemented primarily to encourage companies to go public, by providing exemptions, most of them temporary, to certain regulations. One exemption in particular applies to SOX Section 404(b), which requires Accelerated Filers to obtain an audit of their Internal Controls over Financial Reporting (ICFRs).

What effect has the EGC designation had on IPOs? An analysis of our IPO database shows that between January 1, 2012 (the JOBS act is effectively retroactive to December 8, 2011) and May 31, 2014, 548 companies have gone public. Of these IPOs, 422 (77%) identified as Emerging Growth Companies at the time of IPO. Out of the 422 designated as EGC’s, 48 at some point dropped EGC status, while the remaining 326 still consider themselves Emerging Growth Companies.

The chart below describes the time between IPO and the loss of EGC status. Each bar represents the number of companies that dropped EGC status within a certain time period after the IPO. Interestingly, only one company dropped their EGC status prior to their IPO. 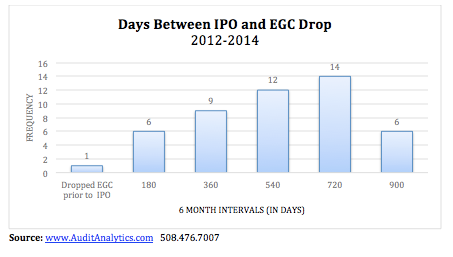 As indicated by the chart, all but 6 of the 48 EGC IPOs that dropped their EGC status did so within 2.5 years of going public.

The benefits of the JOBS Act are easy to see: easier access to capital markets and a lessened regulatory burden. However, opponents of the Act argued that diminished transparency during the EGC period would hurt investors in the long run. At least when it comes to the Section 404 exemption, there is no clear indication to substantiate this argument. Out of the 48 companies that dropped EGC status, 26 have already filed an ICFR opinion. For the period covered by the analysis, only one of these ICFR opinions was ineffective. In other words, the rate of ineffective ICFRs for EGC companies (3.8%) was comparable to that of the general population.