How much should an audit cost? It’s a difficult question to answer. It’s not as simple as charging an hourly rate: since a lot of audits are fixed fees, billable hours are irrelevant except to internal P&Ls. Many audit engagements are even suggested to be loss-leaders – the job loses money but the prestige of the client is worth more to the firm than the fees.

That said, there are undoubtedly limits to these possible variations, and the fees for most audits will probably fall within a range of reasonableness. No one (reputable) would audit Apple for a mere hundred grand, even if it is one of the most respected companies in the world.

In this entry, we investigated the relative audit fees of Russell 3000 companies on a broader industry basis (using the NAICS classification system), looking at audit fees compared to both revenue and assets.

Intuitively, one might expect the largest factor in pricing an audit to be the expected amount of time it will take to complete the job. So, the more complex and labor-intensive the audit, the more expensive it will likely be.

Is this intuition confirmed on an industry level? What do audit fees look like in, for example, the retail industry? Retail audits are typically less complex than financial services jobs. Retail clients do not have complicated revenue transactions. It isn’t common for retail companies to have sophisticated derivative and hedging activities. So we would expect retail companies to have lower-than-average audit fees.

Financial institutions, on the other hand, have exceedingly complex accounting rules for a wide array of financial products – so complex that in some cases they aren’t understood by anyone! Therefore, one would expect the audit of a financial institution to be significantly more expensive than that of a retail client.

In order to test these hypotheses, Audit Analytics performed an analysis of Russell 3000 companies from 2005 to 2012. Using the NAICS codes, we analyzed an industry breakdown of audit fees for these companies.

Chart 1 below shows audits fees as a percentage of total revenue for Russell 3000 companies audited by the Big Four. 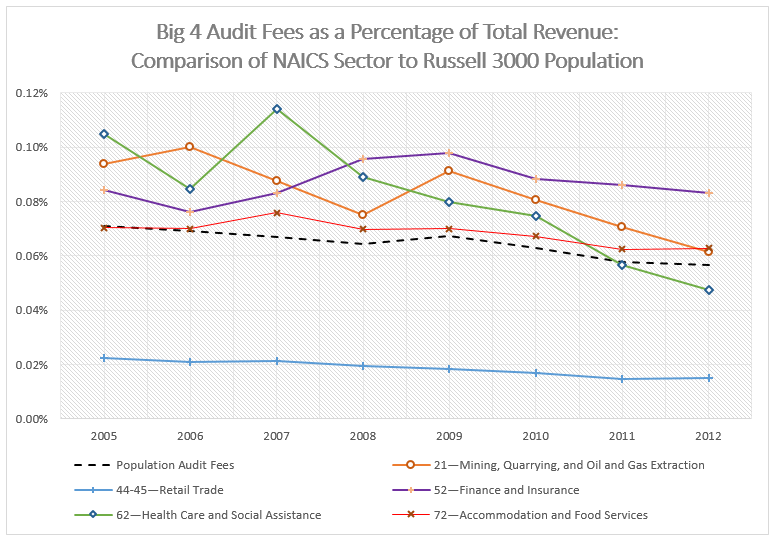 Also of interest is the high audit fees for the Finance and Insurance industry. No doubt the added regulations of the Dodd-Frank Act and the increased risk associated with financial institutions has played a role in that industry’s rise in audit fees.

Chart 2 presents the same data, seen through a different lens. In the chart below, audit fees are shown as a percentage of total assets. This should show us a different picture. Asset-heavy industries such as Finance and Insurance should fall lower compared to more service-oriented industries such as Health Care. 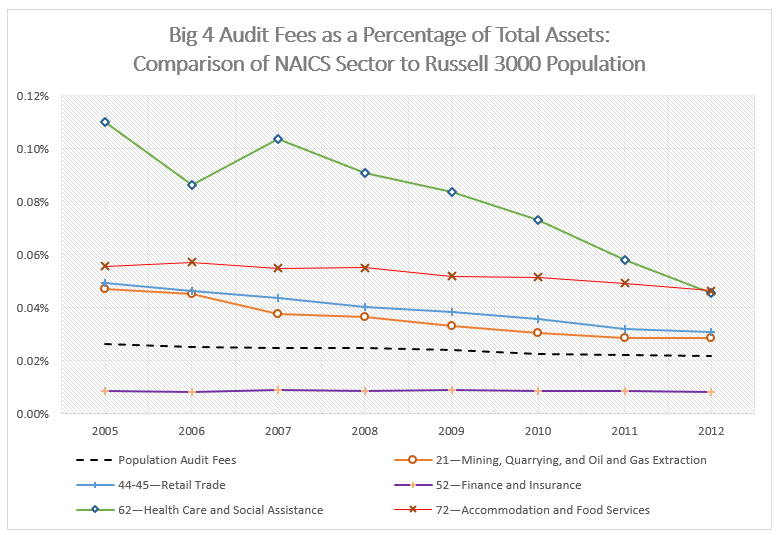 We wonder what caused the spike in 2007 for Health Care and Social Assistance, which is seen in both Charts 1 and 2. Also interesting to note is that, when considered as a percentage of assets, the audit fees for the Health Care and Social Assistance industry have dropped a remarkable amount from 2005 to 2012. This drop is more or less the same when considered as a percentage of revenue.