How does a company know what to pay its officers? Hewlett Packard (HPQ) recently raised CEO Meg Whitman’s salary from a nominal $1 to a much more reasonable $1.5 million, explaining that such a raise would “bring Ms. Whitman’s salary to a competitive level among the salaries of the chief executive officers of HP’s peer companies.”

In other words, as we noted last year, peer groups are an important benchmarking tool. More specifically, the use of compensation peers (sometimes referred to as executive peers) has become essential to a company’s annual Compensation Committee review. Peer information is useful in attracting and recruiting new talent, but also helps to motivate and reward the company’s high performing and experienced leaders, as seen in the case of HP.

We wanted to see for ourselves what HP’s reasoning process might have been, so we used Audit Analytics’ peer group analysis tool to gather a list of HP’s peers. We collected our results in the table below. 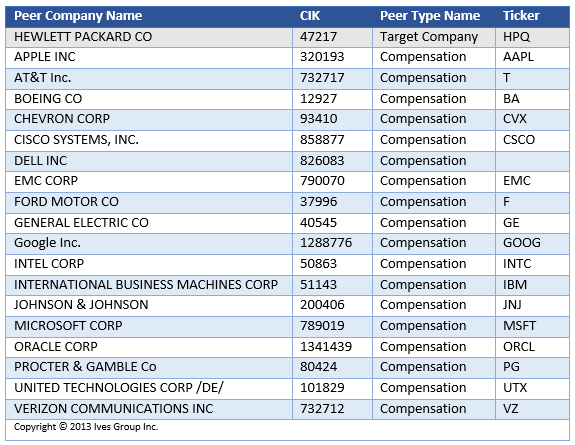 But this is just a piece of the puzzle. Executive peer groups are not limited to evaluating executive compensation. Companies also use this information to rank themselves against their peers’ revenue, net income, market cap, stock performance, and other financial metrics.

With that in mind, it seems reasonable to conclude that the more frequently a company is cited as a peer, the more likely it is to be seen as a performance benchmark for the companies citing it. This could be a strong indicator of good governance. For example, HP names 18 companies as peers, but 44 different companies named HP as a peer. Further, of the 18 companies that HP names as a peer above, 16 (all but AT&T and Chevron) name HP as a peer themselves.

The companies most frequently cited are mostly major multi-nationals. Firms like Johnson & Johnson, Honeywell, and IBM are famously well-run companies, so it is no surprise that they are often cited as benchmark peers.

* Note that these figures are base salary only. Stock compensation, bonuses, and other incentives and remuneration are not included.↩