Apple Inc. released its third Conflict Minerals Report yesterday, in which they disclosed reaching a significant milestone. 100% of their 242 identified smelters and refiners are now participating in “independent third party conflict mineral audit programs”. This shows rapid improvement over the past 5 years. In 2010, only two of the company’s 109 smelters and refiners participated in these programs. 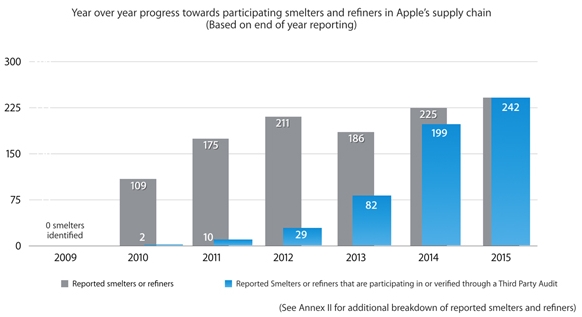 In reaching this milestone, Apple’s focus and disclosure regarding conflict minerals has shifted. Apple’s biggest concern in 2014 was ensuring smelters and refiners were complying with the Conflict-Free Sourcing Initiative’s Conflict-Free Smelter Program (CFSP) or a similar program. In fact, the company disclosed that they were “giving [smelters and refiners] a deadline of compliance or participation by the end of 2015, or they will be removed from Apple’s supply chain”. Then, in 2015, Apple removed 35 smelters and refiners from their supply chain for failing to initiate a third party review program.

Although Apple was able to reach 100% smelter and refiner third party audit program compliance, they were unable to determine that their supply chain was conflict free. Apple’s supply chain still contained minerals from smelters that were either no longer in operation or refused to engage in a third party audit program that were ultimately removed from the supply chain later. It will be interesting to see if Apple reports have a conflict free supply chain next year, and whether or not that report includes an Independent Private Sector Audit (IPSA).

Apple’s disclosure shows that they are committed to eliminating conflict minerals from their supply chain despite the court ruling last August that reaffirmed that companies do not have to disclose whether their products are conflict free. With a large company like Apple positioning themselves as a leader in responsible mineral sourcing, expect more companies to follow.