Last week, Audit Analytics released its annual report Audit Fees and Non-Audit Fees: A Fourteen Year Trend. The report provides a detailed breakdown of fees paid by accelerated filers and includes an additional analysis of companies that filed an auditor attestation that disclosed ineffective ICFRs for the prior year.

A review of non-audit fees as compared to audit fees is of interest because non-audit fees can sometimes appear to be a concern for auditor independence. If an auditor earns a large percentage of its fees by performing non-audit assignments, this dynamic may, over time, subconsciously undermine an auditor’s professional skepticism while performing the independent audit. 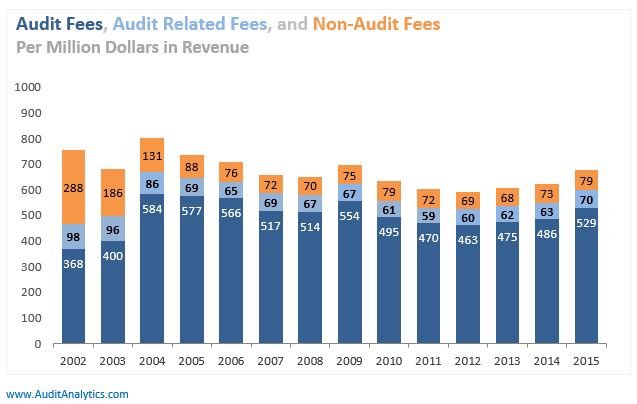 Since our last report, audit fees have increased by 9%. The ratio of audit fees over revenue (including audit related fees for tasks such as due diligence, accounting consultations, and internal control reviews) increased to a 2015 value of $599 per $1 million of revenue.

In addition to a historical analysis of the audit fees and non-audit fees of the entire research population of accelerated filers, Audit Analytics performed further analysis of the subset population of companies that filed an auditor attestation that disclosed ineffective ICFRs for fiscal year 2013. Those companies experienced an increase in audit fees the year before the disclosure and further increases in fees thereafter that peaked the year after the disclosure.

As noted by Compliance Week, the data also shows those companies with adverse ICFR opinions paid less in external audit fees and non-audit fees in the years leading up to the adverse opinion. After the adverse attestation, the subset population paid almost double when compared to those fees paid by all accelerated filers for the same period.