In this post, we look at a recent paper titled “Qualitative Characteristics of Financial Reporting Errors Deemed Immaterial by Managers” by Preeti Choudhary, Kenneth Merkley, and Katherine Schipper. The authors use Audit Analytics’ databases on restatements and immaterial error corrections to provide an in-depth analysis of the different types of error corrections – material and immaterial – based on the differences in the way each is described and corrected. They further examine the impact and predictive characteristics of the less severe errors deemed immaterial. The authors differentiate between two types of immaterial errors, namely revisions and out-of-period adjustments.

The determination and designation of an error as material or immaterial is the responsibility of management together with the auditor. The Journal of Accountancy suggested over ten years ago that although most investors would not be influenced in their investment decisions by a fluctuation in net income of 5% or less, quantitative estimates are not enough to define materiality. Likewise, Choudhary, Merkley, and Schipper note that even an error that is small percentage of income or assets could be material. 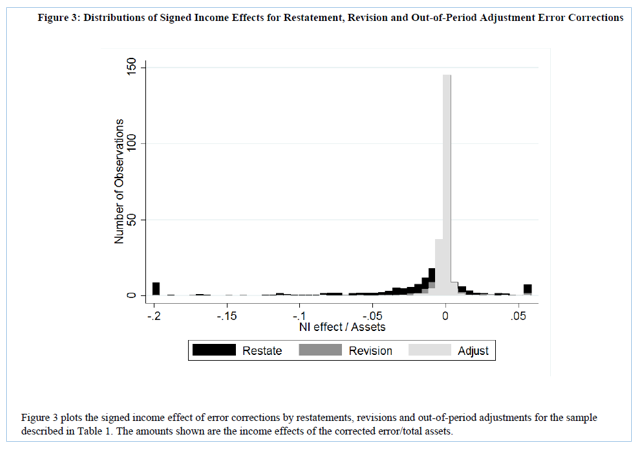 This overlap suggests that managers’ consideration of qualitative factors leads to a variation in whether an error is deemed material or immaterial.

The market response and reaction to error announcements was then analyzed to assess whether investors appear to believe there is information in immaterial error corrections that is relevant to pricing securities. The authors found that market reaction to the immaterial errors was less severe than reaction to material errors. Yet, the findings suggest that immaterial errors, especially if disclosed in a non-routine filing such as an 8-K or associated with multiple issues, still trigger negative stock price reaction.