BDO carried its momentum from 2013 into the first quarter of the new year, topping the SEC auditor changes again with a net increase of eight new clients. The firm’s biggest new clients were j2 Global and Neogen, which together brought in almost $5 billion of market cap.

As with last time, the table below presents a comprehensive view of the gains and losses of the major global and national firms. It shows how many SEC audit clients each auditor gained or lost, and also the auditor from or to which the client was either won or lost. (Click to expand the image.)

EY had a bit of a rough quarter this time around, with a net loss of 19 clients. Of the Big Four, KPMG had the best quarter on a net gain of 5 new SEC audit engagements. KPMG added about $38 billion in market cap with its new clients.

The next table presents the top five gains and loss for Accelerated Filers, which are companies with public float between $75 million and $700 million. 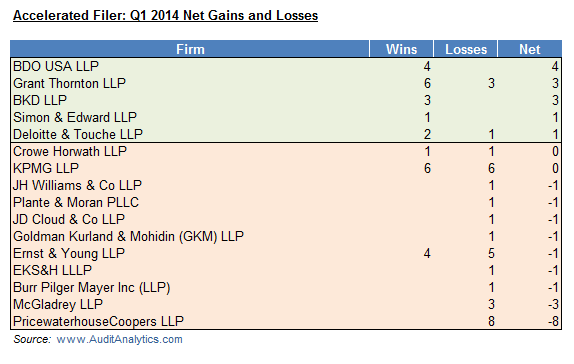 And the last table presents the top five gains and losses for Smaller Reporting Companies.

Audit Analytics tracks audit fees, auditor changes, restatements, and a wide range of audit and regulatory disclosures, with the ability to create daily email alerts for new disclosures by industry, auditor, and both auditor and company location. In addition to these and many other databases, we also offer qualitative red flag alerts for due diligence and risk assessment. Please contact Audit Analytics for an online demonstration or to learn more about these data sets. You can call us at (508) 476-7007 or e-mail info@auditanalytics.com.