With rumors continuing to circulate that KPMG is in the midst of a transaction to acquire Rothstein Kass, it has been speculated that Rothstein’s extensive private fund practice has been the driving factor of the acquisition. Just how large is the hedge fund practice of Rothstein Kass? The table below shows the ten audit firms cited most frequently by hedge funds in their Form ADVs. 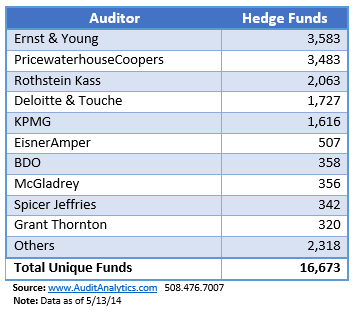 Assuming KPMG were to retain all of Rothstein’s hedge fund clients, then KPMG would leapfrog both PwC and EY on its way to the total engagement leader in the hedge fund auditor market.

1. This analysis of engagements counts all affiliate firms associated with a unique Fund ID as one instance. So, for example, if one unique Fund ID cites both BDO USA and BDO Cayman as its auditor in the Form ADV, we counted that as one fund for BDO. ~