Back in October, we took an initial look at the results of shareholder voting to ratify their company’s auditor. The main focus of that post was to give an idea of the overall trends in the outcome of these auditor ratification votes. It turned out, based on our analysis, that shareholders resoundingly vote in favor of ratifying the auditor. We found that 63% of the time, auditors were ratified with at least 99% of the vote going in favor, and 95% of the time, the auditors received at least 95% of the votes! (Refer to that post for additional background on auditor ratification votes as well.)

In this post, we updated that analysis with a slightly different population. Looking at the Russell 30001, we examined auditor ratification votes that occurred between January 1, 2011 and December 31, 2013. Perhaps unsurprisingly, the analysis of this population derived similar conclusions.

At the other end, the shareholders of Imperial Holdings (IFT) did not ratify the selection of their auditor for the year ending December 31, 2013. In that case, 9,477,861 (52.71%) votes were cast against ratification, compared to 8,495,376 in favor, while 7,050 abstained. What was the company’s response? Their 8-K indicated that “the Audit Committee of the Company’s Board of Directors will take this vote under advisement.” Whatever the Audit Committee considered, the same auditor did indeed perform the audit for the year ended 12/31/13.

As in the last post, we present the same data from the table above in a histogram chart to give a visual representation of the distribution of percentage votes against. As the chart below makes clear, it is very rare for shareholders to vote against auditor ratification in any significant numbers. The vast majority of all votes, indicated by the height of the bars, fall to the left of the 3% bin.2 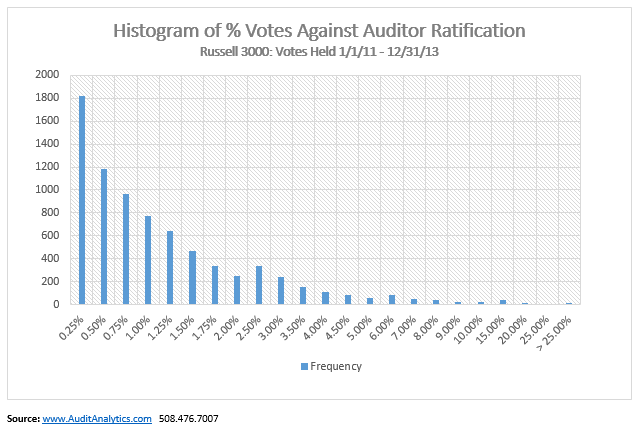 The accounting literature on auditor ratification is a little sparse, but what research there is suggests that votes against increase with longer auditor tenure, companies that put ratification up to a vote may have better governance than those that don’t, and unfortunately, that management does not seem to be influenced by the shareholder voting results.

In future posts, we will take a more detailed look at auditor ratification. One thing that would be an interesting topic for further investigation is the results of auditor ratifcation votes immediately after an auditor change. Another question: are auditor changes more likely after high votes against ratification? Stay tuned for more.