Following our recent post on the subject of non-timely filings, we now turn to the question of what explanation late filing companies give as the reason for the delay. The chart below presents a breakdown of the reasons given for the untimeliness in NT filings.1 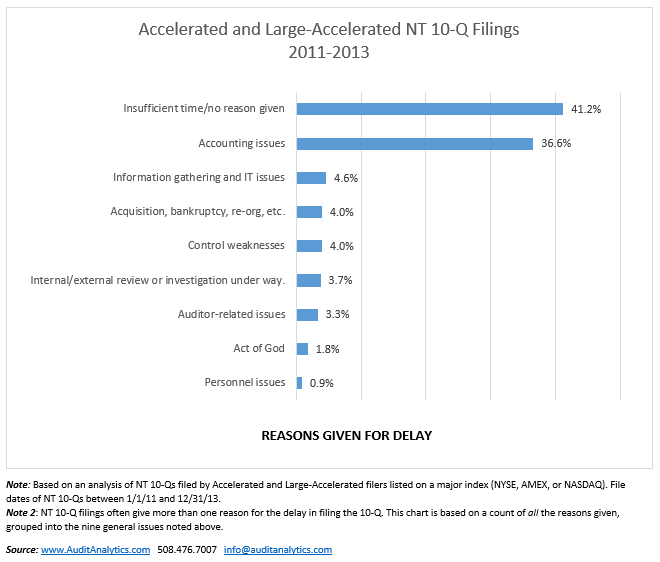 The most common reason given is kind of tautological: the company simply states that it could not file on time because… it didn’t have enough time. Explanations like this are included in the top bar, “Insufficient time/no reason given”.

Interestingly, accounting-related issues are the second most common reason for non-timely filings. As one might expect, the market responds negatively to late filing announcements, but a recent paper by Bartov, DeFond, and Konchitchki noted that the negative market reaction is most pronounced for NT 10-Q filings that cite accounting-related reasons as contributing to the delay. They write:

The chart below shows the time delay between the filing of an NT 10-Q and the subsequent filing of the actual 10-Q for the respective period. The columns are split to show the breakdown between companies that cited accounting-related reasons and those that did not. 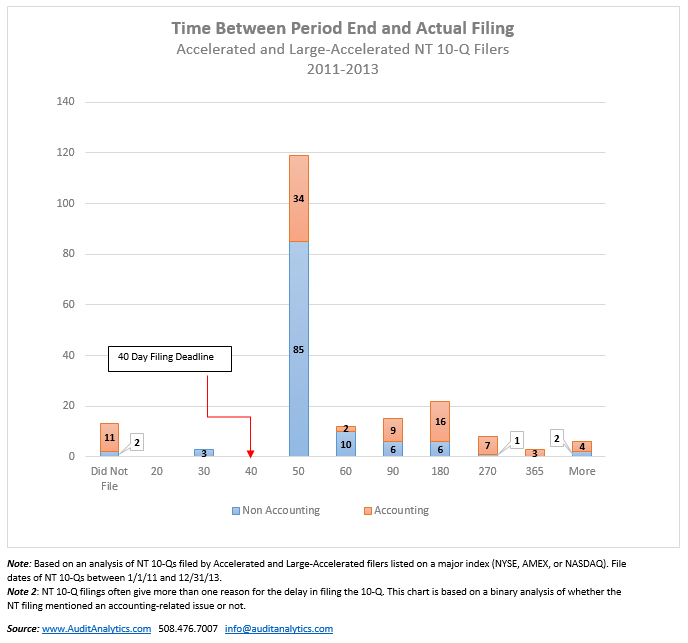 1. The population of the analysis in this post is the same as in our previous post, and as noted in the chart, namely: NT 10-Qs filed by accelerated and large accelerated filers listed on a major index.~
2. The three actual 10-Qs that were filed early, before the 40 day deadline (found in bin “30” in the chart), were filed by Herbalife. Due to the independence issues of their previous auditor, those 10-Qs were filed without financial statements that were reviewed by an auditor. The company also filed NTs for those periods to explain that the financials were not reviewed.~