SEC Comment Letters are a rich vein of data on companies and their operations. For the average investor, however, that data is difficult to mine. The total volume of communication can be quite substantial, and the letters are often dense. Few stakeholders have the time or the energy to dig through them.

But what if you just want to screen for potential investment? While no single high-level metric can replace a thorough analysis of a given company’s communications, some metrics may help create a good subset of companies that deserve further scrutiny.

In this blog, we consider another metric that may help to identify more important conversations. Comment letters, just like regular e-mails and corporate memos, often have additional people copied. The rule of thumb from the corporate world, i.e., to include only people who should care about a particular issue, is equally applicable here. Hence, if an external auditor is copied, it is likely that the letter discusses an accounting issue that ought to be brought to the auditor’s attention. In many cases, the person listed in the “CC” section is a partner at the firm; and in some cases the person is even identified as the engagement partner.

Here we notice that the percentage of companies that copied their external auditor on at least one comment letter remained stable between 8% and 10%, despite — as we noted in our post in May — a significant overall decline in the total number of letters.

We took a closer look at these 8% to 10%, and compared them to the general population. In particular, we wondered whether letters copying the auditor generally involve more complex issues. To test this hypothesis, we used a metric mentioned above: the number of letters that it took to wrap up a conversation. We are assuming that more difficult questions, or simply more questions, would generally require more letters of back-and-forth between the company and the SEC. 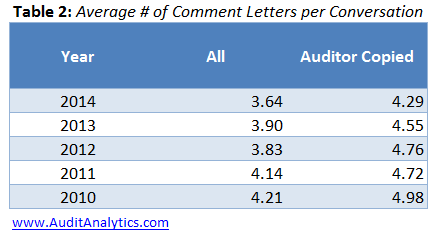 As one can see from the table above, conversations that include the auditor contain more letters on average than all conversations as a whole. This suggests that such conversations are more likely to be discussing more material issues. One explanation could be that the technically difficult accounting-related questions or issues are harder to resolve than MD&A-type comments. Another explanation could be that these questions involve more complex and/or unusual transactions, where the guidance is not very clear. In either case, there would be a good reason for a stakeholder to investigate further.

Next, let’s take a look at a specific accounting issue that is normally considered to be significant: revenue recognition.

In the table above, we see that comment letters pertaining to revenue recognition copy the auditor with a higher frequency than the general population of letters. This suggests that our intuition was correct: complex conversations are more likely to involve the auditor.

Although no single metric can replace thorough research, good metrics may help filter large amounts of information to help focus on potentially more interesting cases. Based on the evidence, it appears that filtering for comment letters that CC the auditor is one such metric.

Note 1: This analysis is based on a population of SEC comment letters that refer to 10-Ks and 10-Qs filed between the years 2010 and 2014. That is, the letter dates used in this post are the filed dates from EDGAR. In our May post, we used the year of origination of the conversation to avoid shifting of material conversations from year to year, caused by dissemination delays. In this blog, for simplicity reasons, we used filing date. This change in methodology would not affect any trend or statistical comparison.
Note 2: Also for the sake of simplicity, we used a count of unique companies from our SEC Comment Letter database as a proxy for the number of conversations. This assumes that a given company is only involved in one 10-K/10-Q conversation per year. (Registration statement comment letters were excluded.) It is rare for a company to be involved in more than one conversation in a year, so we believe that this is a reasonable proxy.