The 2015 filing season marks the second year of conflict mineral reporting for public companies. In all, there have been 1,279 reports – Form SD (Specialized Disclosure) – filed since January 1, 2015. This is down from the 1,330 reports filed during the 2014 calendar year. Analysis of the 2014 conflict mineral disclosures can be found here.

In the table below, we show a breakdown of the top 10 industries that file Form SD. Compared to last year, there is only one new industry in the 2015 list. Measuring and Controlling Devices, NEC (SIC 3829) came in tenth on the list, displacing Electronic Components, NEC (SIC 3679).

Despite a 10% decrease from 2014, companies classified as Semiconductors and Related Devices (SIC 3674) were once again the most common filers of Form SD: 113 such companies filed the form, more than double the amount filed by Surgical and Medical Instruments companies. The decrease was largely due to 12 companies being acquired between the 2014 and 2015 filing seasons.

Form SD filings were down across most other industries, but the individual decreases do not appear to be significant.

Next, we will look at the breakdown of the conflict mineral status disclosed by companies. 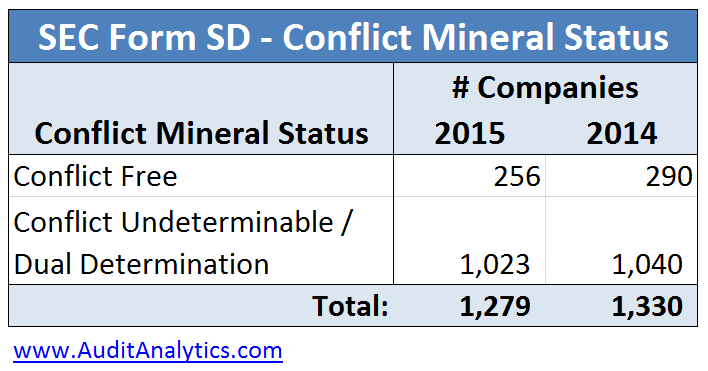 50 companies that disclosed themselves to be DRC Conflict Free in 2014 changed their determination to DRC Undeterminable/Dual Determination in 2015. While in many cases their CMR disclosure was enhanced with additional Reasonable Country of Origin Inquiry information, Due Diligence information, and Smelters Lists, no reason was given for the status change.

In the example below, one company both expanded its disclosure and changed its determination from Conflict Free to Undeterminable.

Based on the results of this RCOI, we concluded that the conflict minerals present in the composition of affected materials in our supply chain did not originate from any of the Covered Countries.

b. We were unable to gather the necessary information from these suppliers to determine the mine or location of origin of our necessary conflict minerals.

In total, six companies obtained an Independent Private Sector Audit (IPSA) for the CMR status in 2015. Only two (Signet Jewelers and AVX Corp) disclosed DRC Conflict Free determinations for all of their products. Of the remaining four, Intel Corp, Kemet Corp, and Advanced Semiconductor Engineering Inc disclosed dual (Conflict Free and Conflict Undeterminable) determinations in 2015, and Koninklijke Philips (Royal Philips) disclosed an Undeterminable determination. Philips, Intel, Signet, and Kemet also filed IPSAs in 2014. Three of the IPSA reports were issued by accounting firms, while the other three were issued by consulting firms.

In addition, Newmont Mining Corp disclosed on its website a “Conflict-Free Gold Report.” Newmont received assurance for its report from Bureau Veritas North America. Gold is the only conflict mineral that Newmont disclosed using in its Conflict Mineral Report.

The pending decision in NAM vs SEC presents an additional limiting factor for the IPSA requirement. The original court decision states that, while companies may voluntarily present themselves as Conflict Free and file an IPSA, they are not required to do so.

If the SEC prevails in NAM vs. SEC, we would expect to see significant numbers of audited CMR reports, instead of just the six in 2015.

Notes:
1)  The numbers are based on Forms SD only. Forms SD/A were not included in the analysis.
2) Form counts are based on the year filed date.  There was one company that filed a duplicate Form SD in each year.