Numbers are used for just about everything in the financial world. Companies report their results using numbers, investors trade in terms of numbers, and most everything is evaluated by numbers. On the face of financial reports, most of these numbers are representative of some type of currency such as the US dollar, which are then evaluated based on more numbers in the form of ratios.

Frank Benford, a physicist at General Electric back in the 1930s, first hypothesized the distribution that now carries his name after noticing that the first pages of the logarithm books were significantly more worn than the later pages. (This was before the time of electronic calculators, of course.) Inspired, he investigated over 20,000 numbers culled from various sources, and defined the distribution in a research paper published in 1938. In the paper, he found that about 30% of the numbers investigated began with the digit 1, 18% began with 2, and so on, with about 5% beginning with 9.

Many explanations for this phenomenon have been proposed. One, based on an intuition, is as follows. Consider the absolute difference between two numbers. Most people can easily understand that the incremental rise from 1 to 2 or from 8 to 9 is the same, namely 1. On the face of it, these seem like equal increase. If, however, we think in terms of percentage growth – like investors do – we see that the “distance” between 1 and 2 (100%) is much larger than that between 8 and 9 (12.5%). This is a characteristic of logarithmic scales.

A lot of research suggests that Benford’s Law can be used to detect anomalies in data, whether from clerical errors, random chance, or outright manipulation. When a set of numbers expected to conform to the distribution do not do so, this can be a sign that there is something wrong with the data. 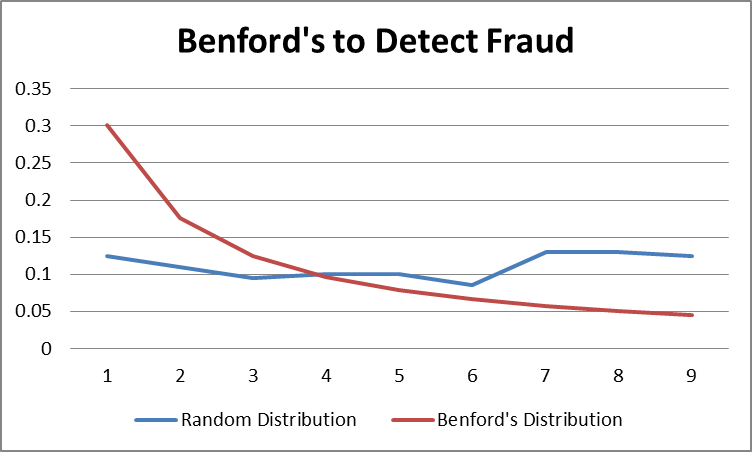 Though not a perfect representation, one can see how the Excel random number generator compares to Benford’s distribution. The large deviation is because the random number generator works off of the notion that every number (in this case 1-9) has an even chance (11.1%) of being selected. How does this relate to fraud? An individual attempting to commit fraud will be very unlikely to manipulate numbers in such a way as to conform with the Benford distribution. Even if the person cleverly succeeds in making up “random” numbers, the resulting distribution will still deviate from the expected distribution.

Benford’s Law has been used to detect fraud in accounting for some time, thanks in large part to the work of Professor Mark Nigrini. The distribution is most often used on an individual account basis, such as accounts payable, to detect the over or under use of certain digits. But recent research has led to an increased use of the law in analyzing financial statements themselves.

The authors used two metrics in measuring a financial statements’ adherence to Benford’s distribution. The first is the Kolmogorov-Smirnoff (KS) statistic, which compares the largest single deviation to a critical value. This allows for a definitive pass or fail answer. The second is the Mean Absolute Deviation (MAD) statistic, which finds the average deviation of the actual distribution to the ideal Benford distribution. 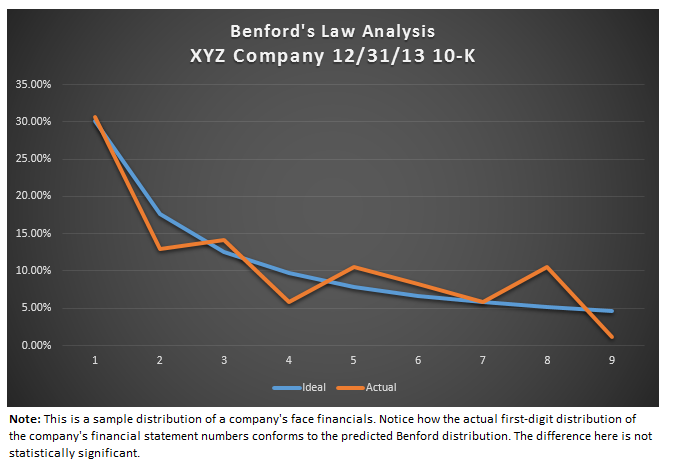 The authors showed that deviations from the Benford distribution are correlated with restatements and Accounting and Auditing Enforcement Releases (AAER). In the remainder of this post, we investigate whether deviation from Benford’s distribution may be predictive of other issues such as adverse 302 and 404 opinions, and non-timely financial reports.

While Benford’s Law should not be used as a decision making tool by itself, it may prove to be a useful screening tool to indicate that a set of financial statements deserves a deeper analysis.