In response to Section 409 of the Sarbanes-Oxley Act related to “Real Time Issuer Disclosures,” the SEC began requiring all 10-K filers to disclose within four business days any personnel changes affecting the company’s directors and officers. This disclosure requirement became effective on August 23, 2004. With over ten years of data available, we can now analyze long-term trends in CEO and CFO departures that may have occurred. 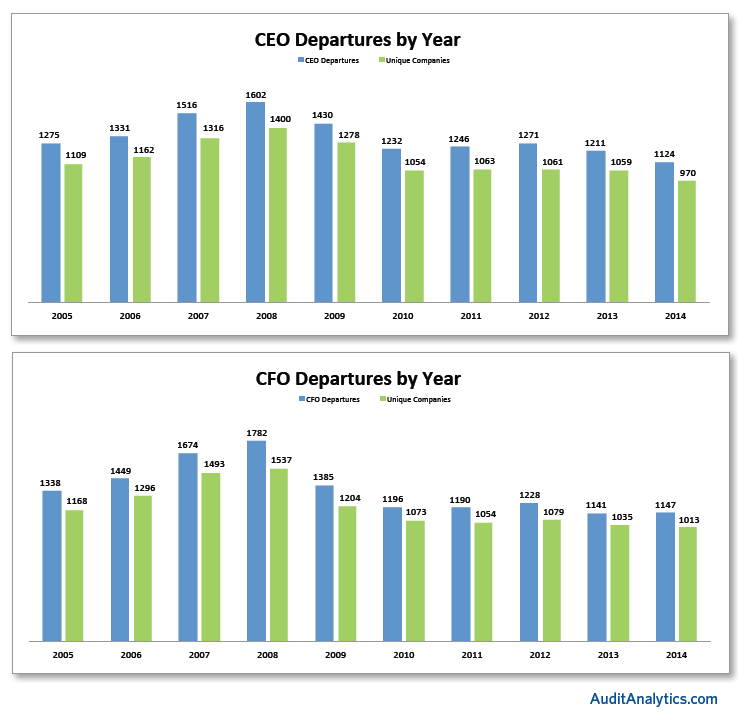 The charts above show CEO and CFO departures by year, alongside the number of unique companies that filed a departure. One clear trend is that the total number of departures increased and peaked in 2008. This increase could have been influenced by many factors. The implementation of Sarbanes-Oxley in 2002 – and especially SOX 404, which began to come into effect in 2004 – resulted in no small amount of turmoil at the corporate offices of US public companies. For example, an increased focus on internal controls and accounting quality led to an increase in the number of restatements. This extra scrutiny may have contributed to CEO and CFO turnover.

The two most common reasons for a CEO departure were a merger/acquisition or a position change within the company. CFOs, on the other hand, were most likely to depart to pursue other opportunities.

If we look at the reasons for departures across the ten-year period, we see that 2009 had the highest percentage of involuntary departures for both CEOs and CFOs. 5.1% of CEOs and 6.1% of CFOs were dismissed or departed involuntarily in 2009, higher percentages than in any other year analyzed. When considering the state of the economy at that time, adverse reactions to company executives may have been predictable. 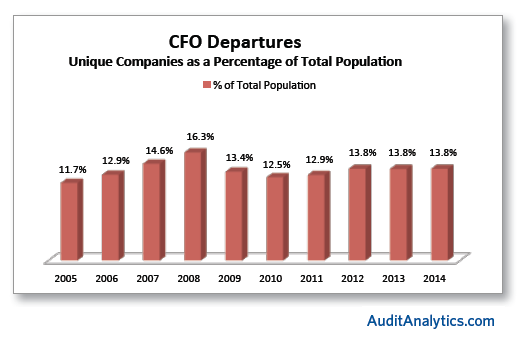 For the full report on CEO and CFO departures, please click here.