In a recent move, the SEC adopted a controversial regulation that extends clawback provisions for U.S. public companies that face significant restatements.

Under the old rule, companies could reclaim compensation paid to key executives based on incorrect financial statements, but only in cases where the restatement was caused by fraud or executive misconduct. The new regulation calls for clawbacks even in cases of an unintentional error.

“Executive officers should not be permitted to retain incentive-based compensation that they should not have received in the first instance,” SEC Chair Mary Jo White said in a statement before the vote.

One thing remains unchanged in the new regulation: a material restatement is still needed to trigger clawback provisions.

Let’s look at the number of non-reliance restatements disclosed over the past ten years. 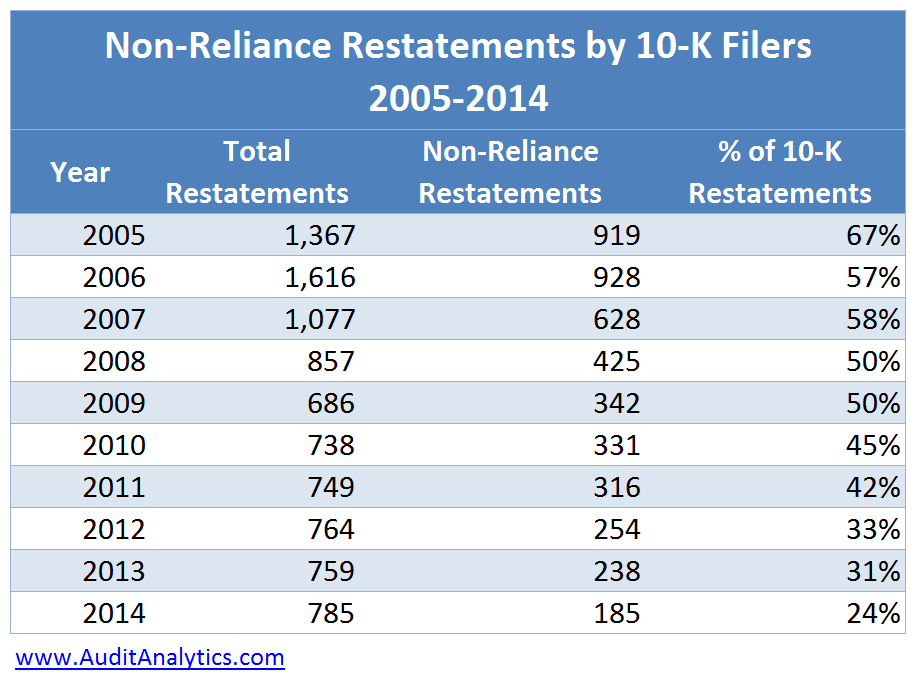 To evaluate the frequency of clawback exposure, we obtained the population of companies that disclosed an Item 4.02 non-reliance restatement in 2014 and that were traded on NYSE or NASDAQ. We then looked at their 2015 proxy statements for information about the application of clawback provisions.

Of the 69 such companies, only four made any mention of the restatement at all in the executive compensation section of the proxy. Only a single company actually “clawed back” compensation from the period restated.

In May 2014, KBR (NYSE: KBR) restated its fiscal 2013 financials due to errors in its revenue recognition. The errors led to an $154 million overstatement of cumulative net income. Here is an excerpt from KBR’s 2015 proxy that discusses executive compensation in relation to the aforementioned restatement.

Due to the restatement of our 2013 financial results, our Compensation Committee and Board of Directors implemented our clawback policy and sought and recovered from our NEOs who are current executive officers and the former CEO and chief accounting officer the portion of their 2013 short-term incentive plan payouts that should not have been paid in light of the restatement. Our current CEO, Mr. Bradie, was not an employee in 2013, and our current chief financial officer, Mr. Ferraioli, joined KBR on October 28, 2013, and was not eligible for a 2013 short-term incentive plan payout. Thus, neither Mr. Bradie nor Mr. Ferraioli were subject to any clawbacks. Our clawbacks are more fully described in our Compensation Discussion and Analysis section of this proxy statement.

The other companies that referenced restatements in their proxies did not invoke clawback provisions, mostly based on immateriality and on a lack of fraudulent intent. The following snippet from one of the proxies is typical.

In February 2013, the Company implemented a Clawback Policy. Pursuant to the Clawback Policy, the Committee has the right to require the Company’s senior executives, including each of the NEOs, to pay back previous MIP payouts in the event that the Company materially restates its financial results as a consequence of significant noncompliance with financial reporting requirements. As announced in August 2014, the Company changed its practice of accounting for royalty and certain marketing and reservation fees in order to comply with generally accepted accounting principles. The financial restatements resulting from this change resulted in immaterial adjustments to the Company’s annual financial statements which did not trigger the Company’s clawback policy.

In addition to clawback provisions invoked by the restating companies themselves, the SEC may rely on SOX Section 304 to impose additional penalties. In a recent action, Michael W. Laphen, former CEO of Computer Sciences Corp (CSC), was required to return $3.7 million of compensation, while former CFO Michael J. Mancuso was required to repay $369K.