The SEC has announced that, beginning July 1, 2015, it will release “no-review” letters to the general public through the EDGAR system. Before this announcement, these letters were only available through Freedom of Information Act requests.

The SEC Division of Corporation Finance is required to review each reporting entity at least once every three years. Transactional filings, such as registration statements, are reviewed on a selective basis. This process often results in correspondence in the form of “comment letters” to the company, which detail the Division’s questions and requests for further clarification.

Until this latest announcement, the SEC did not release any formal guidance in regards to companies that were not selected for review. In the June 5, 2015, statement, the SEC indicated that the change was made in order to increase transparency of the filing review process. 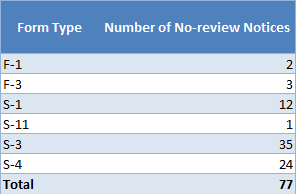 The criteria used by the SEC to select filings for review are still confidential and it is not clear whether, for example, post-registration stock movements were different for companies that were selected for review versus those that weren’t.

It is important to note, however, that even before the formal “no-review” release announcement, some no-review letters were publicly available. For example, on February 8, 2008, Constellation Energy Partners LLC received such a letter for their S-3 registration statement filed January 30, 2008, which simply stated: “This is to advise you that we have not reviewed, and will not review, the above registration statement.”

While these letters by themselves do not, by definition, offer much in the way of information, it will be interesting to see if the added transparency into the review process will allow for further investigation.

[i] The count of no-review letters is not complete as Audit Analytics is currently analyzing recently filed letters.