How likely is a company to be cited for a violation of non-GAAP reporting rules? Is non-GAAP violation a primary offense? That is, can a company face an enforcement action just for that? Let’s take a look at a recent development.

On January 18, 2017, the SEC Division of Enforcement issued a press release announcing that “New York-based marketing company MDC Partners [NASDAQ: MDCA] has agreed to pay a $1.5 million penalty to settle charges that it failed to disclose certain perks enjoyed by its then-CEO and separately violated non-GAAP financial measure disclosure rules.”

Fraud committed by executives is certainly a primary offense. There is no surer way to get an enforcement action than to have a CEO improperly receive over $11 million and then fail to disclose it. The question is, however, how non-GAAP reporting fits in this picture. Would it warrant an enforcement action on its own accord?

According to the SEC, “MDC Partners presented a metric called “organic revenue growth” that represented the company’s growth in revenue excluding the effects of two reconciling items: acquisitions and foreign exchange impacts. But from the second quarter of 2012 to year end 2013, MDC Partners incorporated a third reconciling item into its calculation without informing investors of the change, which resulted in higher “organic revenue growth” results. MDC Partners also failed to give GAAP metrics equal or greater prominence than non-GAAP metrics in its earnings releases.”

The press release stops short of commenting whether “organic revenues growth” was intentionally misrepresented or not. Yet, changes in the calculation of a major metric that were not properly communicated to investors could arguably be seen as a major violation. Still, the second part of the SEC statement is related to “undue prominence”, which we have seen elsewhere earlier this year. According to our recent analysis, at least 78 companies have received SEC comment letters that cited question 102.10 of the C&DIs. Are all of these companies at risk? Or was there anything particular to MDC Partners that triggered SEC scrutiny?

To begin with, MDC Partners had enough warning from the SEC about aggressive use of non-GAAP metrics. Since 2012, MDC Partners has had three separate SEC CorpFin reviews. Non-GAAP concerns were raised in every one of them, and each review contained at least one question about “organic revenue growth” – the same metric that was named in the enforcement action.

This is not simply routine. First, not every company that is reviewed by CorpFin necessarily receives any comments. Further, even when comments are issued, the raw probability of receiving a non-GAAP comment is less than 20%. But to really understand whether MDC Partners’ non-GAAP concerns were unique, let’s take a look at the chart below. 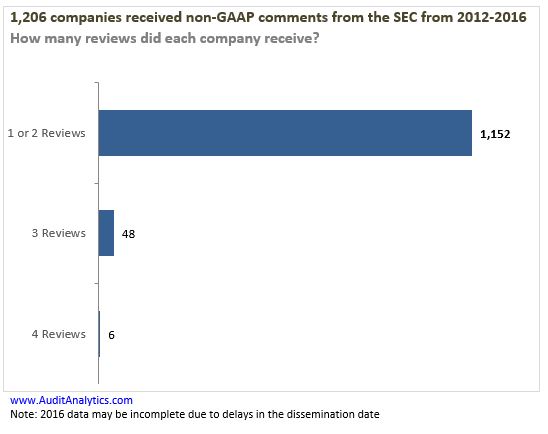 With three reviews, MDC is in the top 4% in terms of the count of the non-GAAP reviews – clearly outside the norm.

In December 2012, the SEC asked MDC Partners to clarify use of the organic revenue growth metric in the executive compensation section. The rules of presentation of non-GAAP metrics for proxies are more lax than for press releases. For instance, there is no requirement to reconcile the metrics that are used for benchmarking purposes and, in some cases, companies can use different sets of metrics in press releases and as compensation targets. Nevertheless, the metrics still need to be clearly defined and the disclosure should be accurate and not misleading.

In 2014, the SEC issued another letter requesting clarification “regarding primary drivers for …organic revenue growth and operating profit”. The SEC also noted that the question pertained to both the company’s annual report and its earnings call. In the same letter, the SEC also questioned “undue prominence” in the non-GAAP presentation and noted that it is not acceptable to describe non-GAAP results as “record” while having GAAP losses. In the follow-up round of letters, MDC Partners agreed to “limit the use of the phrase ‘Record Results’ only to measures of performance defined by GAAP”.

And yet again, the 2015 review had a nearly identical question about the transparency of the organic revenue disclosure. The company responded that “to the extent material, it will expand its disclosure in its future SEC filings to include more detail on the underlying reasons for organic growth in revenues and profitability.” The same review also questioned calculations of EBITDA, used as a covenant in MDC Partner’s credit agreement.

The overall picture of these Corp Fin reviews is not a pretty one. MDC Partners heavily relied on the “organic revenue” metric and were repeatedly told to provide a more clear and transparent disclosure. Also, the “undue prominence” concerns focused on promotional “record results” language and (arguably) extended beyond a routine request to present GAAP numbers first.

It will be interesting to see if other non-GAAP enforcement actions follow and if any of the companies subject to the action received Corp Fin non-GAAP letters in the past.