Early last week, Fortune had a very interesting article about an upcoming Supreme Court case that’s set to consider the “fraud on the market” doctrine. It asked whether the decision might spell “Armageddon” for shareholder class action suits.

The fraud-on-the-market doctrine addresses the following difficulty. To prove a traditional fraud case, the plaintiff has to show not only that the defendant lied to him, but that he fell for that lie — i.e., “relied” on it — in a way that caused him injury. So in the securities fraud context, if a company’s CEO publicly understates what he really thinks his company’s asbestos liabilities are — one of the frauds Halliburton stands accused of — that lie might obviously lull an individual investor into purchasing the stock, believing it to be a safer bet than it really is. When the truth later emerges, and the stock falls precipitously — 42% in Halliburton’s case, after it got hit with a mammoth asbestos verdict in December 2001 — that investor can credibly claim to have been injured.

But if that investor wants not just to sue on his own behalf but to bring a class action, how can he prove that the entire class of investors who bought Halliburton stock during the same time period attached the same importance as he did to the CEO’s allegedly false statement — or that, indeed, they ever even knew that the statement had been uttered?

One answer might be: He can’t. In that case the investor couldn’t bring a class action and, if he was just an individual, with only a few thousand bucks worth of stock losses at stake, it probably wouldn’t make economic sense for him to bring suit of any kind.

The FOTM doctrine comes to that person’s rescue. It theorizes that when there is an efficient market, in which stock analysts routinely pore over 10Qs, 8Ks, media reports, and, indeed, every passing rumor implicating the companies they cover, any material statement by a company’s CEO quickly gets incorporated into the price of its shares. Every investor can then further be assumed to rely on the “integrity” of the share price — i.e., the assumption that that price isn’t being artificially depressed or inflated by fraudulent statements. With the benefit of the FOTM assumption, an investor can now bring a class action because the CEO’s allegedly false statement can be assumed to have been incorporated into the share price, and all investors can be further assumed to have relied on the integrity of that price, whether or not they actually ever knew the statement had been made and attached any significance to it.

Further on, the author quotes a source who noted that FOTM has “produced a litigation leviathan” and is “the most powerful engine of civil liability…in American law”. Between 1997 and 2012, the article estimates that nearly $17 billion in legal fees were paid to the defense attorneys, on top of $73 billion paid in total settlement costs.

$17 billion is no small sum, even when spread out over a decade and a half, especially when one considers the relatively small population of “biglaw” firms. According to an analysis of our Litigation database, the top ten busiest law firms in this area were named as defendant representation in about 36% of the total cases. 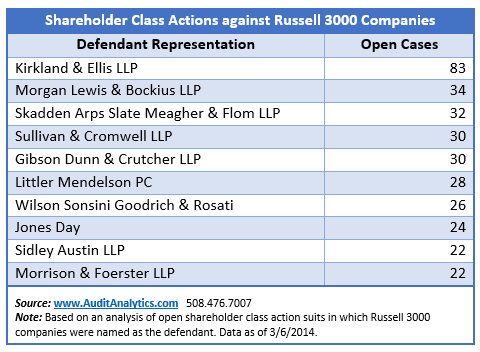 The table above lists the 10 law firms involved as defendant representation in the most open shareholder class action suits, in which a Russell 3000 company is named as defendant.

According to our database, there are around 1,000 open cases of this type involving 608 unique Russell 3000 companies, and there are 588 different law firms representing the 608 companies. Based on these figures, we see that the ten law firms in the table above are only 2% of the population of law firms involved in this kind of work, but act as representation in 36% of the total number of cases.

Assuming (very roughly) that the $17 billion in legal fees noted above averages out evenly over the total number of cases, then those ten firms are looking at a share of more than $6 billion between them! Of course, in reality, the biggest law firms are likely to represent the largest companies, and the largest companies are likely to be involved in cases with higher settlements, so we’re guessing the top law firms are looking at a much larger share of the total dollar amounts.

If the Supreme Court case decides against the Fraud on the Market doctrine, the effect could indeed be “Armageddon” for the firms specializing in this area.