Would a restatement by any other name still seem as bad?

Financial restatements are increasingly leaving out a crucial word in their disclosures: “restatement” – the thing itself. This coincides with the continuing increase in the percentage of revision restatements, i.e., those filed without an Item 4.02.

The average stakeholder might expect a restatement to be a straightforward affair. Though time-consuming and perhaps difficult to analyze, if an error is discovered, then a restatement should follow. The company promptly corrects the error, files Item 4.02 if needed, amends the affected filings and adds a relevant disclosure to its subsequent financial statement… end of story. But, in reality, there are dozens of variations on restatement disclosures, and, in our opinion, these variations are becoming more common.

One thing that is essential to the proper disclosure of a correction of prior period results is clarity: everyone agrees that errors should be clearly disclosed. But what exactly is a clear disclosure?

In the past few years we have noticed a trend in financial restatements that suggests companies are changing the way they disclose restatements. We have reported on the increasing number of so-called “revision” restatements, for example, and the decrease of non-reliance “Re-issuance” restatements — or small “r” and Big “R” restatements, as they are often informally called.

In analyzing these restatement filings, we noticed what seemed to us to be another trend. Namely, that the word “restatement” was itself showing up less frequently in restatement disclosures: an odd paradox. To test this hunch, we performed a textual analysis of our restatement database from 2005 to 2012.

The table below summarizes the results of our analysis of disclosures provided by companies to describe their restatements.

In 2006 over 93% of the companies used the word ‘restate’, or some derivative of the word, in the text of their disclosure. By 2012, only 44% of disclosures correcting prior year results actually mentioned “restate” or a derivative, a remarkable change in pattern in less than a decade. If the companies no longer ‘restate’ their financial statements, what do they do with errors?

What we have noticed is an increase in nuance to these disclosures. The language is more varied than before. Some companies revise prior periods. Others correct immaterial errors. There are also those that record prior period adjustments, and there are also quite a few that modify their accounting or identify overstatements of certain assets. The English language is quite rich, and there is more than one way to explain why financial statements were wrong.

This is not the only shift in restatement disclosures in the past few years. When a material error to prior period financials is discovered, then a company should file an Item 4.02 8-K to disclose that reliance should not be placed on previously filed financial statements. Amended financial statements should then be clearly marked as ‘restated’, and the audit opinion should be modified.

This is a strange phenomenon that has many people asking questions.

In our 2012 Restatement Report, we showed that the percentage of restatements filed without an Item 4.02 has been steadily increasing each year since 2010. In 2012, the most recent year analyzed, nearly two thirds (65%) of all restatements were revisions, almost double the rate in 2005. 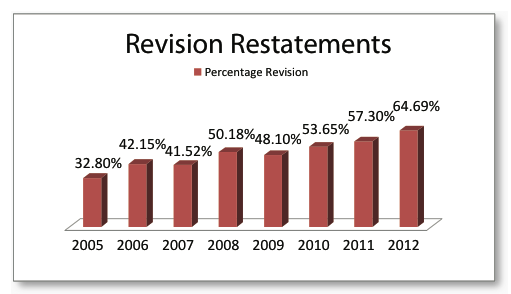 Some would argue that the change in disclosure language comes as a result of a change in the nature of errors identified and corrected. One possibility is that financial reporting quality is simply getting better, so there are fewer big mistakes, and most mistakes are relatively minor compared to pre-SOX reporting. (Enron is hardly comparable to a technical correction of a cash flow statement that had no effect on net income.) In fact, the evidence from our 2012 Restatement Report shows that the materiality of restatements has indeed declined significantly compared to pre-SOX times. In such cases, a CFO might argue, it really would be inaccurate to say that previous financial statements can no longer be relied on.

Perhaps, in other words, the change in language accurately represents the reality: that financial statement errors are becoming less frequent and less severe due to improved financial reporting quality. Or perhaps companies are simply avoiding the use of “restate” due to the negative connotations associated with that word.