On June 7, 2018, MiMedx Group, Inc. [MDXG], a biopharmaceutical company, announced that the Company is going to restate previously filed financial statements for years 2012 through 2016, and the first three quarters of 2017. A financial restatement of this magnitude is a significant red flag in respect to a company’s accounting quality. 1

A recent Wall Street Journal article, citing Audit Analytics data, noted that the period of time affected by the restatement is four times longer than the average, indicating a substantial and long-standing problem. In 2017, on average, companies necessitating restated financial statements had to go back about 500 days, while the period of non-reliance for MiMedx spans nearly 5 years.

There are often warning signs that a company will need to issue a restatement. For MiMedx, those warning signs were apparent well before June 2018. In the analysis below, we will look into some of the early warnings and explain why we think MiMedx restatement is material. 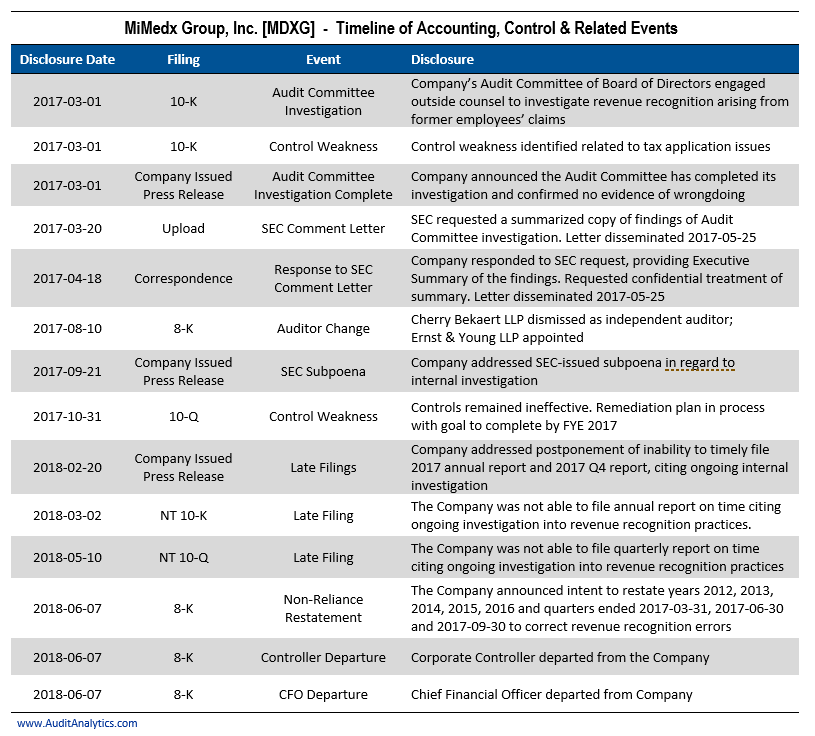 The first sign of unusual activity at MiMedx was an internal investigation disclosed in their annual filing on March 1, 2017. The Company disclosed that the Audit Committee of the Board of Directors engaged outside counsel to conduct an investigation after two former employees filed a lawsuit in December 2016 alleging, among other things, fraudulent business practices related to revenue recognition.

In the same March 1, 2017 annual report, the company disclosed material weakness in the Company’s internal controls related to tax accounting for Fiscal Year 2016, an issue seemingly unrelated to the Audit Committee investigation. However, the disclosure of ineffective internal controls is itself a red flag, as it indicates that a material error in accounting practices may go undetected.

Concurrent with the 2017 annual filing, the company issued a press release on March 1, 2017 regarding the internal investigation, stating that the Audit Committee completed their review and “confirmed there is no credible evidence of any wrongdoing on behalf of members of MiMedx management.”

While internal investigations are not uncommon and often do not reveal incorrect historical accounting practices, they are important to take note of from an investor perspective, as red flags may eventually materialize.

The next red flag was made public in May 2017. In a comment letter dated March 20, 2017, the SEC requested a summary of the Company’s internal investigative findings. MiMedx provided a publicly redacted summary summary to the SEC in a letter dated April 18, 2017, invoking a confidential treatment request pursuant to SEC Rule 83.2 The company requested that “the redacted portions be maintained in confidence, and not be made part of any public record and not be disclosed to any person (other than the Staff).” 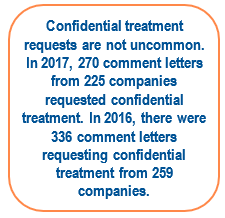 It is important to note that SEC comment letters are a routine component of the Division of Corporation Finance financial reporting review, not to be confused with a subpoena issued by the SEC, a far more troubling event.

Continuing a trend of notable disclosures, 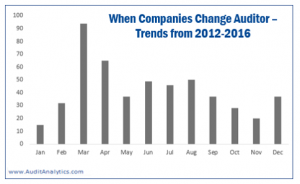 on August 10, 2017, MiMedx dismissed Cherry Bekaert LLP, the Company’s independent auditor since 2008. Changing auditors is not a risk indicator on its own. However, statistically, 62% of auditor changes from 2012-2016 occurred during a 180-day window after a company’s fiscal year end, with most changes occurring in March and April for a December 31 fiscal year end. Considering MiMedx dismissed their auditor in August 2017, about 215 days after their December 31, 2016 fiscal year end, the auditor change in this circumstance was unusual.

Following the auditor dismissal, the Company disclosed that they had received a subpoena from the SEC in a press release on September 21, 2017. Referring to the subpoena as a “distraction”, the Company stated that it was related to the prior internal investigation prompted by the former employee lawsuit, noting:

“After the counterclaims alleging channel-stuffing were filed by the terminated employees last December, we began to assemble summary documentation to supply to the SEC, which would include information from the investigation conducted by the Board of Directors and others. […] The Company then received a subpoena from the SEC that appears to relate to the former employees’ allegations, and primarily is related to the matters that were the subject of the Company’s previously disclosed internal investigation.”

SEC subpoenas do not always end with enforcement action, but they are serious events that should not be dismissed lightly.

This is when the accounting red flags became increasingly more significant for MiMedx. At the beginning of 2018, MiMedx had two late filings in a row: the annual filing for 2017 and the first quarter filing for 2018, citing the ongoing internal investigation into revenue recognition practices as a reason for the delay. Audit Analytics analysis has found that more than half of the companies citing accounting issues as a reason for a late filing resulted in a financial restatement.3

To address the postponement of its annual filing, the Company issued a press release on February 20, 2018, continuing to utilize moderated language surrounding the scope and extent of the investigation:

More bad news was to follow. On May 10, 2018 the Company issued a press release addressing the indictment of individuals previously employed by the Department of Veteran’s Affairs (VA), who had been charged with bribery related to speaker fees paid by MiMedx. The Company assured its shareholders that they were cooperating with the VA Office of Inspector General and clarified that the Company itself had not been indicted.

Finally, on June 7, 2018, the Company disclosed the intent to restate financial statements encompassed by a long-term non-reliance period. 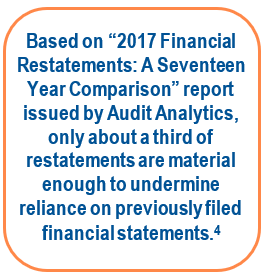 Failure to properly recognize revenue, including misstating during which period the revenue was collected, and accounting misstatements related to sales and distribution contracts, had a material impact on extensive components of MiMedx’s financial statements, including inventory, accounts receivable and earnings per share.

The non-reliance disclosure was accompanied by the announcement that the Chief Financial Officer and the Corporate Controller departed from the Company, effective June 6, 2018. No reason was given for the sudden departures, but it is likely that the departure of top accounting personnel was related to the financial restatement.

This article was first available to subscribers of our Accounting Quality Insights. For more information, email us at info@auditanalytics.com or call (508) 476-7007.

2. “The Commission’s Rule 83 (17 CFR 200.83) provides a procedure by which persons submitting information may request that [the information] be withheld when requested under the Freedom of Information Act”↩