Individually, an employee going against his/her employer for a claim runs the risk of costly legal fees that may — most assuredly — add up to more than what the claim is for. However, joining with other employees in a class action lawsuit mitigates those costs and increases the chances of winning a claim.

But what about those employees that are bound by arbitration agreements?  A study done by the Economic Policy Institute shows that 53.9% of nonunion private sector employers have mandatory arbitration procedures in place.

From 2010-2015, non-unionized employees gathered together to file separate collective actions against Ernst & Young, Epic Systems Corp. and Murphy Oil USA, Inc., accusing the defendants of unfair labor practices in regards to failing to pay overtime wages under the Fair Labor Standards Act. The defendants argued that each employee signed an employment agreement waiving their rights to join a class action suit and to settle labor claims in arbitration. The court ruled in favor of Murphy Oil USA and auditor’s motion to dismiss the collective action and compel arbitration. The plaintiffs appeal and the Ninth Circuit Court reversed the district court’s decision and remanded the case.

The Supreme Court heard a consolidated set of cases: Epic Systems Corp. v. Lewis, Ernst & Young LLP v. Morris, and NLRB v. Murphy Oil USA.  In its efforts, the Supreme Court attempted to settle federal laws that contradicted one another. On one side, there was the 1925 Federal Arbitration Act which encouraged the use of arbitration. On the other side, labor laws from the Roosevelt era and the National Labor Relations Act of 1935 allowed workers the right to band together.

Justice Neil Gorsuch issued an opinion for the 5-4 ruling preventing workers from using the Federal Arbitration Act’s “Saving Clause.”  The Saving Clause allowed workers to skirt around arbitration and place their claims in class action lawsuits, provided there was a violation of federal law. The ruling relates to disputes over wages and disputes of discrimination based on race, gender, religion or national origin.

Audit Analytics has looked at litigation cases within the past five years and found that Russell 3000 companies as well as auditors such as PricewaterhouseCoopers, have been named as defendants in 42 Collective and Class Action litigation for violations of the Fair Labor Standards Act (FLSA) and Civil Rights-Jobs. 22 of said cases are closed. As shown below, 12 of the closed cases were settled between the parties while five were dismissed. In the case of Forsyth et al v. HP Inc et al, Judge Edward J Davila granted HP’s motion to compel arbitration, stating in his order that “If a contract contains an arbitration clause, the clause is presumed to be valid”. 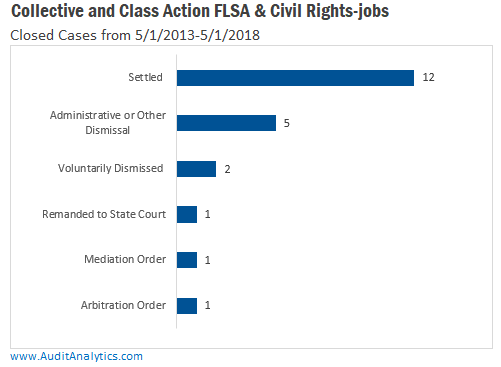 Defendants are arming themselves with the conservative-based decision. For instance, in Chen v. Genesco Inc the defendant’s counsel filed a notice of the Supreme Court’s decision in Epic Systems Corp. v. Lewis in support of Genesco’s motion to dismiss.

With all this said, we expect to see more companies adopting mandatory employment arbitration and class action waivers, resulting in a decline in the number of class and collective action lawsuits filed against companies surrounding labor law issues and an increase in the number of dismissals in those types of current open cases.

Audit Analytics is an independent research provider that delivers innovative subscription content to the accounting, legal, investment, regulatory, and academic communities. Our research and services provide business intelligence, analysis, and benchmarking to our subscribers.