In 2011, the Securities and Exchange Commission (SEC) initiated fifteen cases against companies alleged to be in violation of the Foreign Corrupt Practices Act (FCPA). Two thirds of those cases involved civil litigation, and the remainder were settled administratively out of court. Jump ahead to 2014, and only one case in eight involving a public company was litigated, while the seven others were settled out of court. Yet, while only one case went to court, this did not prevent 2014 from being a record year in terms of settlement amounts. Two large corporations, Hewlett Packard and Alcoa, agreed to pay $108 million and $384 million respectively. Both companies settled criminal charges in parallel with civil allegations.

Further, although it is still early days, 2015 has already seen two FCPA cases, both settled administratively. Matteson Ellis of Corporate Compliance Insights projected an increase of overall actions, noting that “in October 2014, SEC and DOJ officials based in Miami described a “good inventory” of cases to come involving Latin America, representing “about every type of industry that one could imagine.” 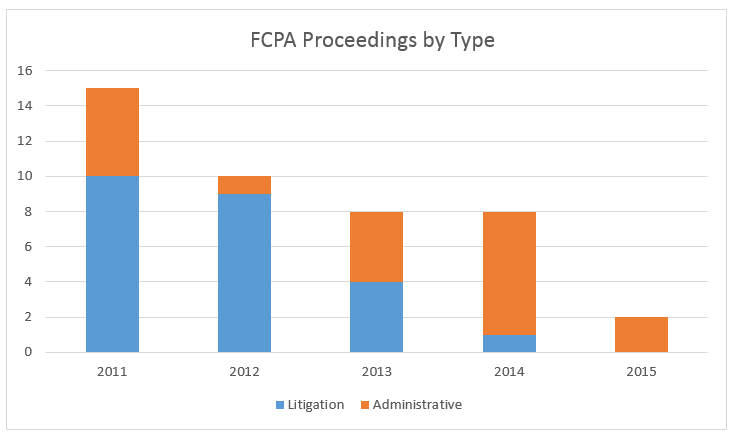 Note: 2015 is a partial year, representing only the first quarter.

It is important to note that these are only cases brought by the SEC. Additional cases have been prosecuted by the Department of Justice, or have involved a joint effort of both the SEC and the DOJ. For example, the DOJ prosecution of Alstom resulted in a $772 million criminal penalty.

The large number of administrative settlements seems to suggest that the SEC has changed tack in enforcing FCPA provisions, as emphasis is placed more on obtaining settlements than on going to court. This is consistent with the speech given by Andrew Ceresney, co-director of enforcement, in 2013:

“Our expectation is that we will be bringing more administrative proceedings given the recent statutory changes,” Mr. Ceresney said. “But we evaluate the appropriate forum in each case and make the decision based on the particular facts and circumstances.” 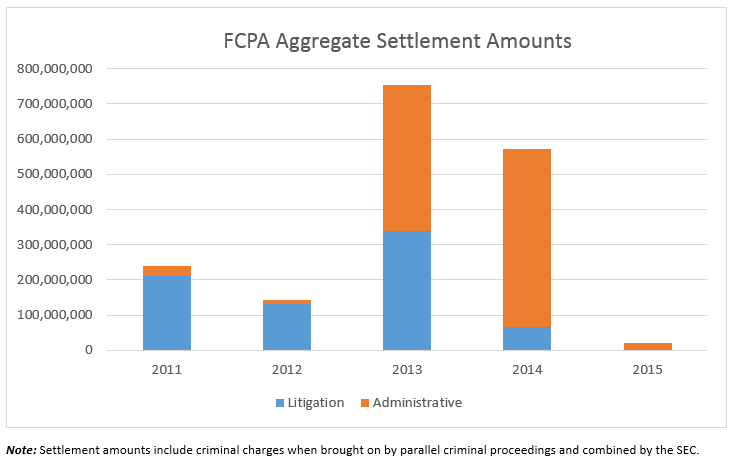 Note: 2015 is a partial year, representing only the first quarter.

While a majority of FCPA actions brought to court involve large corporations and yield large settlements, there have also been a number of smaller administrative settlements. For example, a 2014 action brought against two former U.S. defense contractors totaled a mere $70,000. Andrew J. Ceresney, the Director of the SEC Enforcement Division was quoted as saying, “this case shows we will pursue employees of public companies who think it is acceptable to buy foreign officials’ loyalty with lavish gifts and travel.”

This change might be related to the provisions of the Dodd-Frank Act that now permit the SEC to bring administrative actions against any individual or entity, even if the violation was unintentional. In the past, the SEC was permitted to bring administrative proceedings only against regulated entities, such as investment advisers or broker dealers.

Overall, FCPA litigation will likely continue to be a point of focus for both the SEC and the DOJ.