Last year we published a detailed report on public-company CEO and CFO departures. In this post, we look into the departure statistics for another core member of the management team, namely the general counsel or chief legal officer. Although the disclosure requirements are not as strict as for the CEO and CFO positions, these roles, as noted by the NYSE’s Robert Barker, are “critical to corporate operations”.

Over the last five years there have been a total of 812 general counsel/chief legal officer departures filed through a Form 8-K.1

As shown in the graph below, the number of these departures has continued to increase each year since 2011. With a five-year-high of 179 departures, 2015 also saw the largest increase, jumping 9% from the prior year. 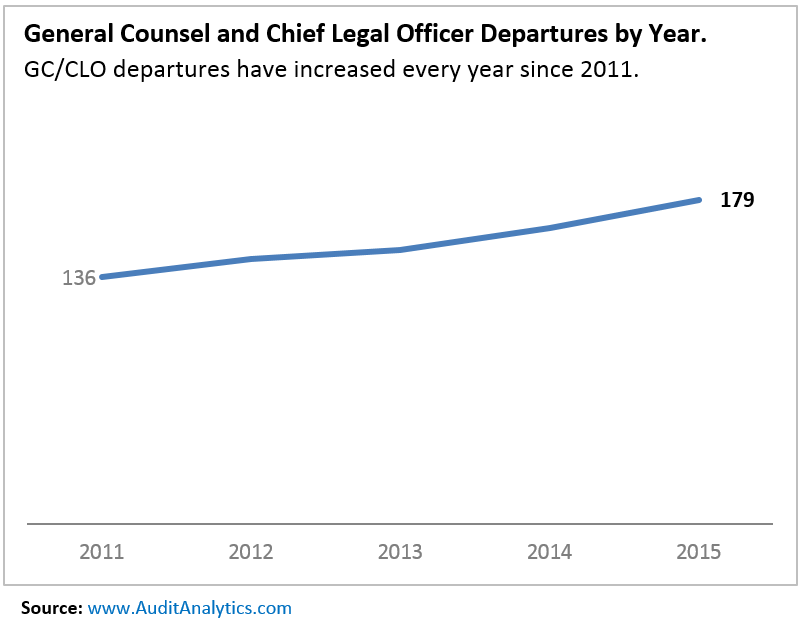 The increase in GC/CLO departures here is interesting. As we noted in our 2015 report on CEO & CFO departures, the number of registrants subject to the filing requirements of 8-K Item 5.02(b) decreased more than 10% from 2011 to 2014. All things being equal, you would expect a roughly proportional decrease in the number of director and officer departures.

That is just what we see with CEO and CFO departures, at least from 2011 to 2014. That alone is notably different from the steady increase in GC/CLO departures.

However, we do see an uptick in both CEO and CFO departures in 2015.2 We are not sure what to make of this reversal, but it does jibe with the large increase in GC/CLO departures from 2014 to 2015 noted above.

Overall, the steady increase in activity for the GC/CLO position, in contrast to the more up-and-down trends for CEO and CFO changes, suggests perhaps that more and more companies are treating the GC/CLO as a principal officer. Might this be to increased compliance risks? The NYSE article linked to above offers a couple other explanations for the increased turnover, including increased competition for talent and more retirements due to the long bull market.

So what causes these departures? Unsurprisingly, the most common reason for a GC/CLO departure was that the officer resigned. Below is a list of the actions given for departures over the past five years. 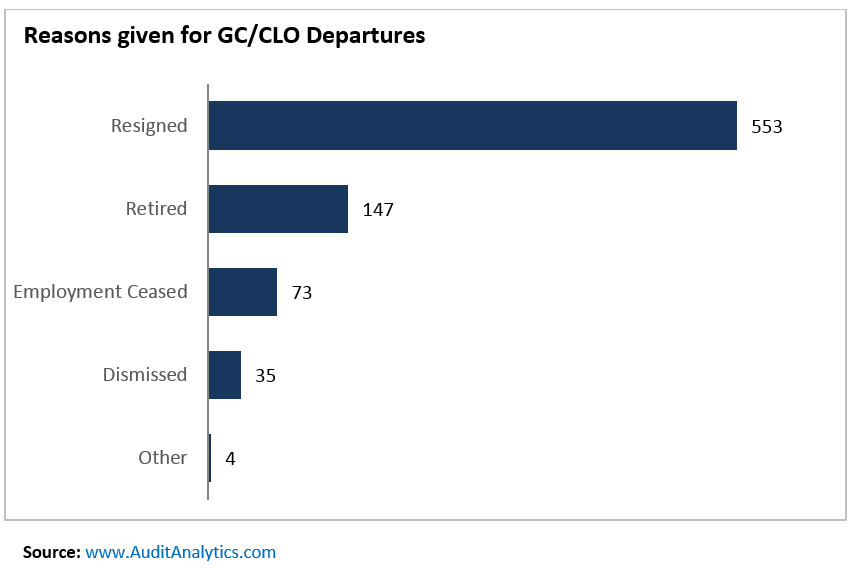 Among the reasons given for resignation were that the officer assumed a new position within the company, left to pursue an outside opportunity or other interest, and had to attend to personal/family issues. That longest coffee break – retirement – was the second most common reason for a GC/CLO departure, which lends some credence to the hypothesis noted above.

Departure by dismissal comes fourth in the list. On the face of it, that action could suggest negative grounds for the departure, but the most common reasons given for a dismissal include company related actions such as a merger or acquisition, corporate restructuring, elimination of the position or bankruptcy. Nothing very sensational there.

While it is still too soon to tell if the departure rate will continue to increase, there have already been 37 reported general counsel/chief legal officer departures so far this year.

Audit Analytics tracks Director and Officer changes with the ability to create daily email alerts by industry, region, and more. You can call us at (508) 476-7007 or e-mail info@auditanalytics.com to learn more about this data set.

1. The Director and Officer (“D&O”) Changes database contains all Item 8-K 5.02(b) disclosures filed with the SEC since the implementation of the reporting requirement. Disclosures calculated as of filing date.↩
2. It is important to note that the 2015 figures for CEO and CFO departures here are unofficial compared to the published report. The numbers might change to some extent using the exact methodology used in the report.↩