ASC 606, effective for fiscal periods beginning after December 15th, 2017, is changing the way companies recognize revenue from contracts with customers. For some industries, the changes are going to be dramatic. For others, such as retail, only limited impact is expected. Will these changes affect the investors? And if so, why should investors care about these changes?

While in many cases the change itself may be deemed immaterial to the company’s bottom line, it will, most definitely affect the comparability of financial results. In addition, in some cases, the change (which is likely to be positive to the bottom line) might be the last straw to help make or break an EPS forecast.

The discussion below is based on a number of examples that we found interesting. For a complete analysis, please contact us.

For the card issuers, gift card sales are essentially an obligation to deliver goods or services in the future. Under both new and old accounting standards, gift card sales are initially recognized as a liability. For some retailers, the liability could be significant – for example, in its annual report Amazon (AMZN) estimated its gift cards liability to be $2.4 billion.

The gift card revenue is recognized only after gift cards are redeemed. But what about the cards that never get redeemed? Should this revenue be deferred indefinitely? (We discussed the gift cards revenue in a previous blog)

The income recognized from the gift cards that are never expected to be redeemed is known as breakage income. In the past, two methods were used to estimate the breakage income, and both were equally acceptable:

Under ASC 606, companies are expected to use redemption pattern method. While the new standard eliminates diversity in practice related to the selection of the recognition method, it is important to note that some estimates are still required. For example, the companies are still expected to exercise judgement in estimating the redemption patterns and determining the expected breakage rate. (For a great technical discussion, see also May 9th, 2017, publication by E&Y)

Let’s take a deeper look at the major estimates (namely, the breakage rate and the redemption patterns) and try to understand what drives them.

Based on SEC filings, the breakage rate (breakage revenue as percentage of gift card sales) is typically 2-4%. The rate could vary from retailer to retailer and depends, among other things, on whether the nominal value of the card is sufficient to complete a purchase. For example, a $50 gift card to Amazon or Whole Foods is more likely to be redeemed than a $50 gift card to a furniture outlet.

A recent report estimated that the breakage rate was as high as 7-8% in 2008, but dropped to as low as 0.75% by 2015. This trend is helpful in assessing which retailers are more likely to adjust their estimates in the next few years. Logically, these are the retailers with higher breakage rates. For examples of breakage rate estimates, read a recent MarketWatch article.

Based on the public disclosure, companies that use the remote method typically delay breakage revenue recognition for 24-60 months. In some extreme cases, the delay could be as long as 10 years.  ASC 606 is going to bring significant changes to this area of accounting. Let’s look at the example below.

In its most recent annual report, Amazon (AMZN) disclosed that after the adoption of ASC 606 the company is going to recognize breakage income over the 9-month redemption period. Prior to that, Amazon used the remote method and recognized the breakage income 24 months after the sale date (when the probability of the redemption became remote).

“We expect timing changes to include Amazon-branded electronic devices sold through retailers, which will be recognized at the point of sale to the retailer rather than to end customers, and the unredeemed portion of our gift cards, which we will begin to recognize over the expected customer redemption period, which is substantially within nine months, rather than waiting until gift cards expire or when the likelihood of redemption becomes remote, generally two years from the date of issuance.”

So, who is going to be affected?

We previously discussed the criteria that we think would be helpful in identifying retailers that would be affected the most. Now, let’s take a look into each of the bullet points.

The table below provides analysis of the number of retail companies that are part of Russell 3000 by the revenue recognition method used.

For the companies that already use proportional redemption method, the change is likely to be immaterial. Companies that currently use the remote method are likely to switch to the redemption pattern method. Since most of the gift cards are redeemed in the year of the issuance, some revenue recognition is likely to be accelerated – bringing extra income to the bottom line. As we can see from the table, at least 60 companies will have to change their breakage revenue recognition method.

The next bullet point on our list, looks at the time frame over which breakage income is recognized. 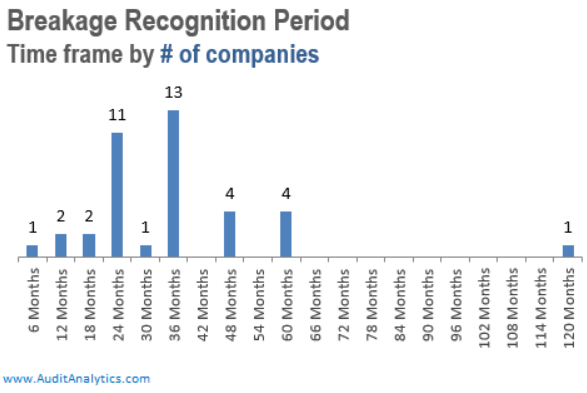 Out of the 263 companies evaluated, Darden Restaurants Inc (DRI) was the only company that disclosed a redemption pattern of more than 5 years.

Finally, let’s look at the number of companies that that identified breakage income as one of the revenue streams affected by the ASC 606 guidelines. So far, 46 companies made such a disclosure. This number is likely to increase as companies progress with their ASC 606 implementation efforts.

Can we estimate the impact?

The key question, as always, is materiality. While almost none of the companies provided any quantitative disclosure about the expected impact of the standard, we can estimate a ballpark number by looking at the past changes in estimates and changes in accounting policies related to breakage income. Such changes are not new, and historically we have seen enough of them. The major difference is that in the past the changes in breakage-related accounting policies were treated as a voluntary change from one acceptable method to another, while now we are going to see mandatory transition across the board.

Here are a few examples:

To estimate breakage income, companies need to have sufficient historical data. Until such data is available, no breakage income could be recognized. For example, Reading International Inc (RDI) did not start recording breakage income until Q4 of 2016. The change was recorded as a Change in Accounting Policy and added $385,000 (more than 4%) to the 2016 net income, and $618,000 (less than 1%) to the 2016 revenue (table on page 66 of filing).

Prior to 2014, we recognized revenue for our gift cards and gift certificates issued in the U.S., which do not expire and have no dormancy fees, only when they were redeemed. At the end of fourth quarter of 2016, we determined that we have sufficient historical information to recognize breakage income on them.  Based on our review of our own historical redemption patterns using company-wide data accumulated over many years, we considered it preferable to estimate a certain percentage of our gift card and gift certificate sales to be recorded as breakage income as it better reflects of our historical redemption patterns and our earnings process.  Effectively, we concluded that a portion of these sales may have a remote likelihood of redemption based on our own historical redemption patterns and thus the liability is derecognized for them.  We will continue to review historical gift card redemption information at each reporting period to assess the continued appropriateness of the gift card breakage rates and pattern of redemption. In accordance with ASC 250, Accounting Changes and Error Corrections, the Company adjusted its comparative financial statements as of and for the years ended December 31, 2015 and 2014 to apply this new accounting policy.”

Overall, it would be safe to assume that, based on the disclosure so far, at least a quarter of the retailers would be affected by the changes in the breakage revenue recognition methods. The actual number is likely to be higher.

We will keep monitoring the disclosure and provide further analysis as more information becomes available.

For the full copy of the report that includes the list of companies affected by the changes in the breakage revenue accounting, please contact us at info@ivesinc.com.