Offices of Bank Holding Companies (NAICS 551111) were at the top of the leaderboard in Q2. Byline Bancorp, Inc., the holding company for Byline Bank, raised just over $2 billion, the most for the quarter.  Byline Bancorp became public on the NYSE market in June, the first time for a Chicago bank in 15 years, according to Chicago Tribune.

Pharmaceutical Preparation Manufacturing (NAICS 325412), with 12 new IPOs, had the most number of transactions this quarter, raising over $850 million.

As seen in the table below, Ernst & Young had 11 IPO audit clients, the most for all firms this quarter. KPMG’s audit clients raised the most proceeds, bringing in over $4.2 billion. 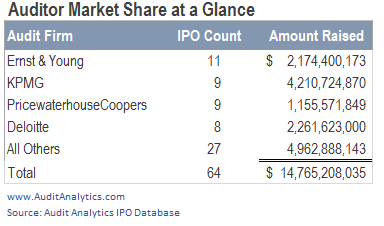 Of note, Moss Adams’ audit clients were in the top 5 for amount raised for this quarter. Moss Adams was also the auditor for the top company of the quarter, Byline Bancorp, Inc. In regards to non-Big Four firms, Marcum led the way with 7 IPO audit clients.

Overall, we have seen a much improved first half of the year compared to last year. IPOs almost doubled and the amount raised has already surpassed the total amount raised during 2016 by over $3 billion.