It comes as no secret that a substantial percentage of acquisitions will fail to deliver expected synergies. The risk of acquisitions increases if the merging company is comparable in size or if the acquired business is material to the acquiring company. For example, the 2001 merger of Hewlett-Packard Company and Compaq Computer Corporation arguably signaled the end of industry dominance for both companies. Compaq was acquired for $24 billion over the opposition of some shareholders. HP had $45 billion in revenue, while Compaq’s revenue was about $33 billion.

In some extreme cases, failed acquisitions can be detrimental to investors. But what if we could predict which acquisitions will fail?

A recent academic paper provides some insight into acquisitions that may generate negative returns to investors. In the “Costs and benefits of internal control audits: Evidence from M&A transactions” (accepted for publication in Review of Accounting Studies), Kravet et al. found evidence that acquisition targets that were excluded from the assessment of internal controls by the acquiring companies generated statistically significant negative stock returns of 0.8% at the time of the exemption announcement (typically, months after the acquisition news hits the market).

The authors identified statistically significant negative returns of 8.8% and 12% for the period of two and three years after the exemption announcement, indicating that negative outcomes are not fully priced at the announcement date.

In addition to negative stock returns, Kravet et al. associated acquiring companies that elect to exclude acquisition targets from control assessments with other negative outcomes, such as higher likelihood of goodwill impairments, lower return on investment, higher probability of a financial restatement and overall lower quality of financial reporting.1

This analysis is interesting from a practical perspective because it allows for an early warning that certain companies may need more scrutiny on a going forward basis. Based on this idea, we performed an analysis to identify a list of cases where assets or revenue of the target company were at around 20% of the acquirer and where acquisition-related exemption was selected in 2017 financial statements. We started from a population of about 3,700 audited SOX 404 reports issued for fiscal 2017. About 390 reports (10.5% of the population) noted acquisition-related exemption and slightly more than 100 reports (or about 3%) were issued by companies where assets or revenue of the target were at around 20% of the acquirer.2

Based on the academic paper, companies that select acquisition-related exemption are statistically more likely to experience negative outcomes than companies that did not select such an exemption.

To further illustrate how this model may be utilized by investors and analysts, let’s look at a case study of FTD Companies [Nasdaq: FTD].

FTD acquired Provide Commerce in 2014 and, under SOX 404 guidelines, elected to exclude the newly acquired company from its assessment of internal control over financial reporting. Consistent with the model, FTD experienced negative outcomes subsequent to the acquisition-related exemption.

According to FTD’s 2014 annual regulatory filing filed with the SEC on March 13, 2015, Provide Commerce was acquired for $430 million. Provide Commerce’s assets represented 52% of the consolidated total assets of FTD as of December 31, 2014. The acquisition was excluded from the evaluation of internal control over financial reporting (the emphasis is ours):

Even though FTD took the exemption, the control issues were disclosed.3 This is not a common disclosure. It was disclosed because companies that discover control issues during the integration process are required to disclose such weaknesses, regardless of the election. In our opinion, such an unusual disclosure may further increase chances of a negative outcome, as discussed by Kravet et al.

In March 2016, less than two years after the acquisition date, FTD recorded an $85 million goodwill impairment related to Provide Commerce unit, consistent with the academic model.

Additional red flags in FTD’s accounting quality matrix include a November 2016 CEO resignation, followed by the CFO resignation in December 2016. While C-level departures are not an immediate concern, CEO and CFO departures within a month of each other could be an early distress indicator.

In the quarterly earnings release and annual report issued in March 2017, FTD identified a material weakness in its internal controls over financial reporting relating to control over the assessment of cross-border indirect taxes. In the same annual report, the company identified the need to restate previously filed financial statements for the years 2014, 2015, and first three quarters of 2016 as a result of errors in cross-border taxes, reducing reduced aggregate net income by about $15 million.

Additionally, in the same 2017 annual filing, the company announced an $84 million impairment of the Provide Commerce, bringing total impairment of this unit to $169 million – a clear sign that the acquisition did not work out as planned. 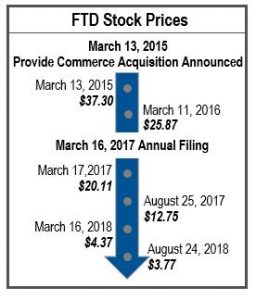 Following this announcement, FTD stock declined sharply to lose more than 20% and prompted numerous legal actions submitted on behalf of the shareholders, alleging, among other things, false and misleading financial statements, lack of effective internal controls, and overstatement of the benefits of the Provide Commerce acquisition.

The stock slide continued into 2018, and as of August 28, 2018, the stock was trading at around $3.8, losing more than 80%, even in comparison to the March 2017 low of about $20.
The slide in March 2017 appeared to be related to the acquisition of Provide Commerce back in 2014. From an investor’s perspective, the key question is whether this failure could have been predicted.

The accounting issues culminated in February of 2018 with a material restatement related to errors in goodwill impairment calculations. The error reduced September 2017 net income by $23 million.

“…The Audit Committee reached this [restatement] conclusion due to a material calculation error in the determination of the Company’s goodwill impairment. We will file an amendment to our Quarterly Report on Form 10-Q for the period ended September 30, 2017 to restate the previously issued interim unaudited condensed consolidated financial statements as soon as practicable. The primary impact of the restatement is to increase the goodwill impairments recorded by the Consumer and ProFlowers/Gourmet Foods reporting units by approximately $21.2 million and $1.8 million, respectively.”

It is hard to say whether material errors will signal that all the bad news is finally out, and that potential turnaround might be just around the corner. At the time of this article, FTD stock was still trading around a 52-week low of about $3.8.

To summarize, under SOX 404, companies are allowed to exclude newly acquired businesses in the first year following the acquisition. There is nothing inherently wrong with using regulatory leeway permitted by the accounting rule. Yet, the paper suggests that the exemption selection may provide valuable and timely insight into the probability of negative stock returns following the acquisition.

This article was first available on FactSet to subscribers of our Accounting Quality and Insights. For subscription information, please contact us at info@auditanalytics.com or (508) 476- 7007.

1. The authors of the paper focused on significant acquisitions where the acquisition target was at least 20% of the market cap of the acquiring company and included only companies that were subject to auditor attestation on internal control were included in the population.↩
2. For a full list of companies identified in our analysis, please contact info@auditanalytics.com↩
3. Notably, FTD’s 2014 annual report was not subject to audit internal control attestation, so FTD and Provide Commerce would not be part of the population evaluated by Kravet et al.↩