As severe financial crisis has spread from Greece to larger countries such as Spain and Italy, voices warning against exposure to sovereign debt have gotten louder. The Cypriot government’s attempt to impose up to a 9.9% tax on bank deposits has increased the fear of a chain reaction that could spread to the other 16 nations in the eurozone.

In an effort to help investors understand the risks involved, the SEC continues to regulate companies with sovereign debt exposure. A recent analysis conducted by Audit Analytics found that in 2012 alone, the SEC issued 33 comment letters to 30 such companies, a 37.5% increase over the previous year. The major concerns reflected in these letters were valuation of debt securities of certain countries, concentration of assets in exposed countries, risk of changing regulation in those countries, credit rating downgrades, and indirect exposure through derivatives. 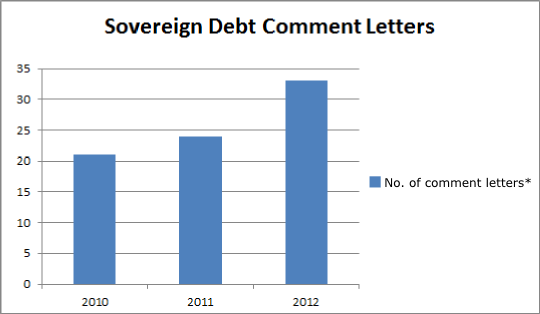 * Only letters originating from the SEC and referencing sovereign debt exposure were counted.

As the story of Cyprus and the rest of the EU continues to unfold, it is likely that we will see an increase in SEC comment letters featuring sovereign debt issues.