2012 showed positive trends for financial restatements. While the total number of restatements over the last four years appears to have leveled off, a closer look at the underlying indicators of severity reveal much more positive results.

The percentage of revision restatements, which represent restatements that do not undermine reliance on past financials — and thus have less impact on the market — have increased in 2012 to 64.49%, the fourth straight year of increase and the highest overall percentage since 2005*.

When considering the adverse effects of restatements filed in 2012, Audit Analytics has found low indicators of severity with respect to each of the following criteria:

One notable trend in these categories is the decrease in the average number of issues identified in restatements. This indicator dropped to 1.38 in 2012, marking the seventh consecutive decrease, and the lowest value in the twelve-year review of restatements. 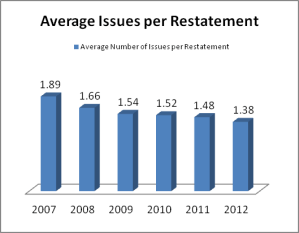