Last week, Audit Analytics published their annual Indefinitely Reinvested Foreign Earnings report which takes a closer look at the balances held overseas by Russell 1000 companies over the last nine years. These earnings, which remain untaxed unless they are repatriated to the U.S., have continuously climbed since 2008 and are now over $2.6 trillion. 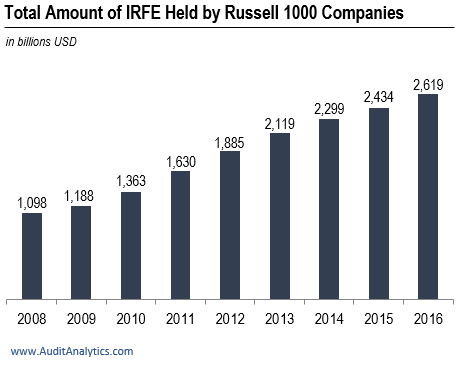 Below is a list of the top 10 companies ranked by their indefinitely reinvested foreign earnings. Although they may have shifted in rank, the companies in these top 10 positions have remained the same since 2014, 9 of which also topped the charts in 2012 and 2013. Together, these ten companies have a current total of $782.8 billion overseas, which constitutes 30% of the total amount of IRFE held by Russell 1000 companies.

For more information regarding Indefinitely Reinvested Foreign Earnings or to request a copy of the full report, please contact us at info@AuditAnalytics.com