Audit Analytics has released a white paper, Predicting Material Weakness, which discusses how certain company events and disclosures—such as late filings, auditor changes, or CEO / CFO departures—can be used to predict the probability that the company will also have a finding of material weakness. 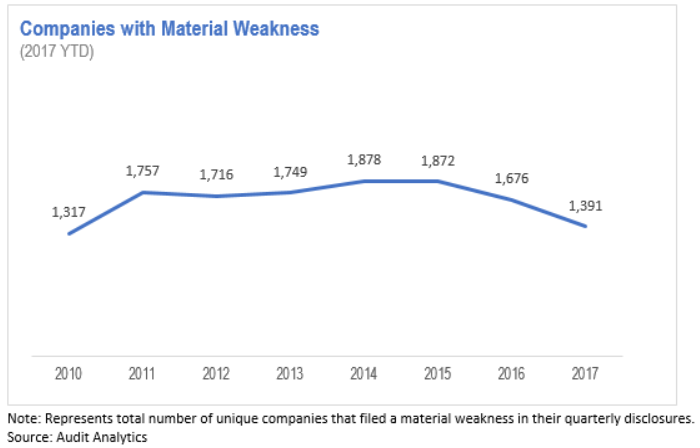 Material weakness findings peaked in 2014 among all filers, and then decreased slightly for the last two years. So far 1,391 companies have reported a material weakness this year.

To make the predictions, we estimated a regression model on Audit Analytics Accounting Quality + Risk Matrix (“AQRM“) data, which tracks warning signs reported across our databases. These warning signs are classified according to three levels of severity: notable, significant, and critical (most severe).

The AQRM flags associated with the largest increase in the probability of a finding of material weakness in the same year include:

In addition to having internal control and disclosure control issues, the AQRM flags associated with increased probability of a finding of material weakness in the following year include:

Predicting material weakness probabilities can be used to analyze current client’s risk, for business development, or to assess prospective clients. Data is available for purchase as part of Audit Analytics’ Exploratory Research. Our analysts engage in this research to help better understand current market conditions, and track the latest disclosure trends and regulations as they impact financial reporting.