Foreign earnings of U.S. companies, especially those retained overseas as indefinitely reinvested, have received a lot of attention in recent years.

Audit Analytics’ annual review of Indefinitely Reinvested Foreign Earnings – Balances Held By the Russell 1000 shows that the total disclosed amount of indefinitely reinvested foreign earnings (IRFE) has risen steadily since 2008. Since last year, the total increased from $2.299 trillion in 2014 to $2.434 trillion in 2015, an increase of 5.9%. 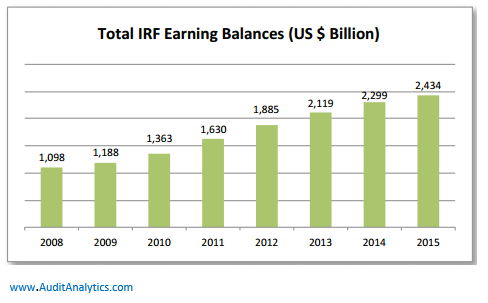 These foreign earnings take on such prominence largely due to the fact that they are untaxed under the U.S. tax code.

All told, at 547 companies, more than half of the Russell 1000 disclosed indefinitely reinvested earnings. Figures from 10-K filings for fiscal 2015 show that IRFE balances now represent 9.46% of total assets of these companies, a significant increase from 5.80% in 2008.

Below is a list of the top 10 companies ranked by their total indefinitely reinvested foreign earnings. Although their ranks may have changed, the companies in these top 10 positions have remained the same since 2014, 9 of which also topped the charts in 2012 and 2013.