Despite the hundred plus IPOs that took place last year, the public company population for this analysis is down from 6,935 to 6,460, a net loss of 475 registrants. The biggest decrease was in the number of so-called “Smaller Reporting Companies”.

This contraction in the number of smaller companies helped the top 10 firms that audit public companies increase their total market share, growing by one percent in comparison to last year’s top 10. The Global Six firms, together with MaloneBailey, Marcum, RSM, and Crowe Horwath audited over 61% (3,985) of the 6,460 public registrants.

The Big Four, BDO, RSM, and Grant Thornton collectively audit 286 smaller reporting companies, accounting for an 11% share of the market. The remaining 89% are audited by over three hundred other firms. 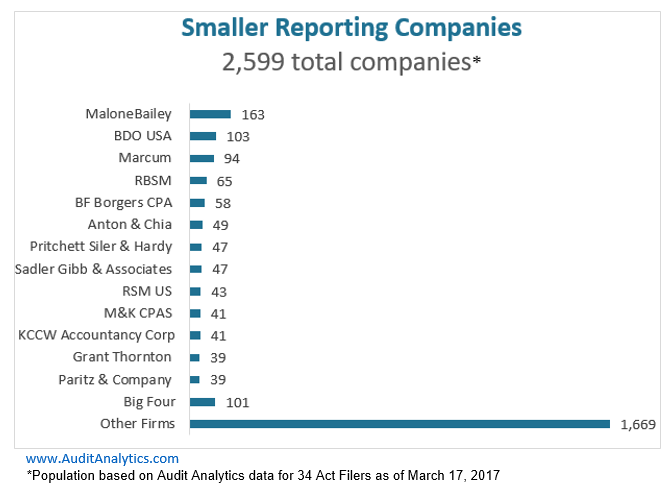 Non-Accelerated Filers, dropping by only 1.5%, had the lowest population decrease from the prior year. Of the 543 Non-Accelerated Filers, the Big Four together with Grant Thornton, RSM, BDO, and Marcum, audited the most number of companies for a total market share of approximately 73%. The remaining 27% is shared by 72 other audit firms. 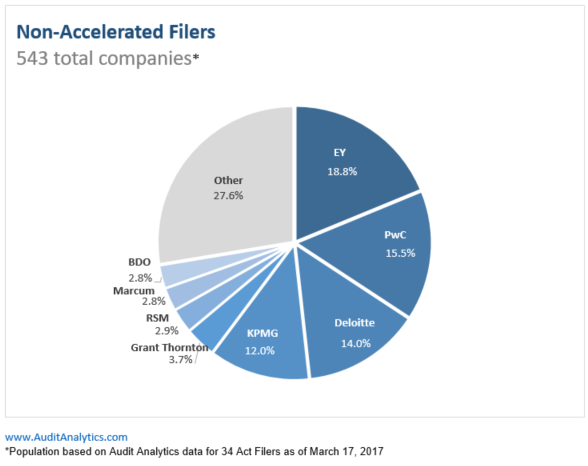 For an online demonstration or to learn more about these data sets, call us at (508) 476-7007 or e-mail info@auditanalytics.com.