Transitioning from a private company to a public one is a complex process. Every soon-to-be public company needs to obtain clearance from the SEC in a process that can take as long as a few years. Complying with the various regulations requires a small army of lawyers, accountants, and other professionals.

In one of our previous posts, we looked at the market share of audit firms involved in IPOs. In this post, we provide a high-level overview of the law firm market share for IPO companies.

In each of the past two years, four law firms were involved with 50% of all IPOs, while the remaining 50% of IPOs were split among a couple dozen other firms. 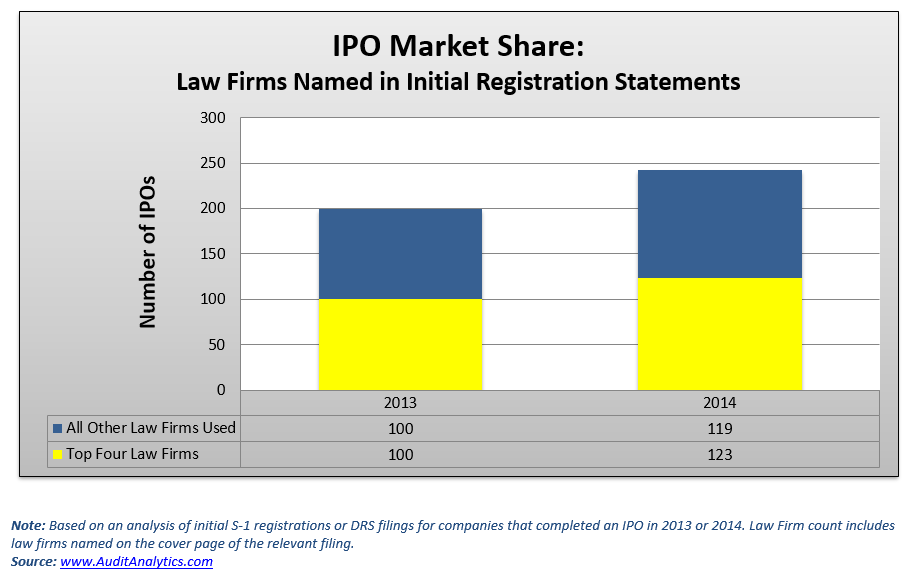 Three firms were in the top four in both years, namely Latham & Watkins LLP, Cooley LLP, and Goodwin Procter. Latham & Watkins, whose “ranks include numerous former high-ranking SEC officials, rule makers and enforcement lawyers” was involved with the most IPOs in both 2013 and 2014. 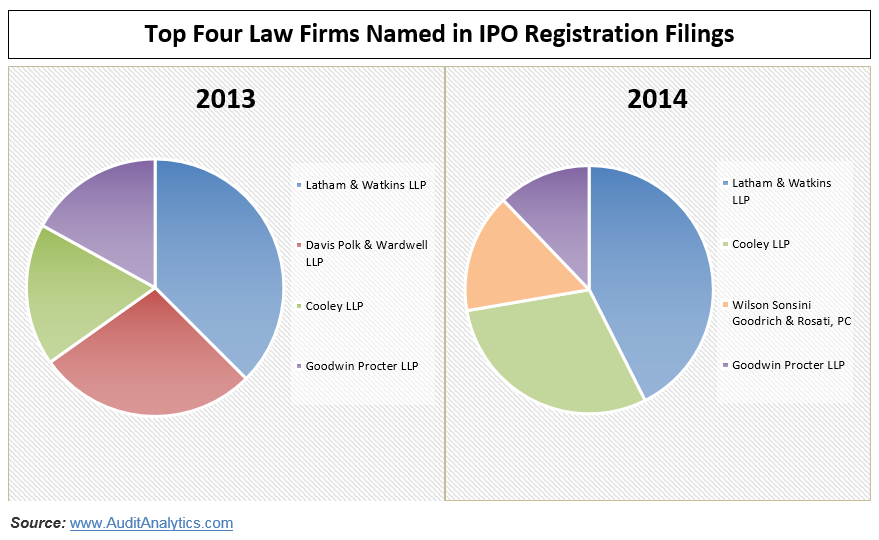 As one can see in the chart above, Davis Polk & Wardwell was among the top four in 2013, but was replaced by Wilson Sonsini Goodrich & Rosati in 2014.

Our review also revealed that the vast majority of IPOs involved more than one law firm. Of the total 442 IPOs completed over the past two years, an overwhelming 87% used at least two law firms. Typically, one firm acts as the lead representative for the company, and another acts as an adviser on behalf of the underwriters involved in the offering.

Audit Analytics is a leading provider of audit, regulatory, and disclosure intelligence. Our clients, including global and national accounting firms, top law firms, universities, and regulators, use our data for market intelligence, risk monitoring, business development, benchmarking and trend analysis. For more information, please contact us at 508.476.7007 or by email at info@auditanalytics.com.

Note: The research in this post is based on an analysis of the cover page of the first prospectus on record for companies that completed an IPO in 2013 or 2014. Only companies that filed via an S-1 were included.