The IPO market has been steadily declining since the early 2000’s. The following graph presents the number of IPOs on the US stock exchanges per year since 2000. 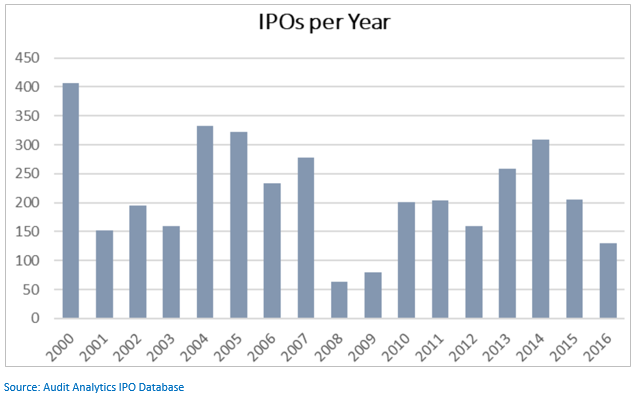 There are a number of factors that are believed to contribute to the IPO market decline. The increasing costs of regulatory compliance for a public company is among the most cited. Additionally, the cost of the IPO process itself may become prohibitive. On the other hand, the number of IPOs (as seen from the graph) started declining in 2003, before the the more onerous sections of the Sarbanes-Oxley Act kicked in.

To help reinvigorate the IPO market, there have been several legislative attempts to ease the burden on the companies that are going public.

One of the more visible attempts to ease the burden was the JOBS Act. Originally enacted April 5, 2012, the Jumpstart Our Business Startups Act aimed at making it easier for smaller private companies to go public by exempting them from certain regulatory requirements and by reducing the costs of the IPO process. One of the most prominent provisions of the Act allowed Emerging Growth Companies (smaller companies with less than 1 billion in revenue) to keep the registration prospectus confidential until 15 days before the IPO.

On June 29, 2017, the SEC’s new chairman, Walter J. Clayton, introduced new rules that extend to all companies one of the JOBS Act provisions, namely the ability to submit their initial prospectus on a confidential basis.

The objective of the new rule is similar to that of JOBS Act, namely, to make going public more attractive for larger companies by streamlining the first steps and allowing them to make adjustments before fully committing to the process.

For smaller and larger companies alike, additional flexibility can help with the timing of the IPO during volatile markets and, if needed, allowing companies to wait until market conditions improve. One added benefit is the ability to withhold competitive financial information until there is a confirmed decision to move forward with the process. It is also important to remember that confidential registration filings are not required to be signed and no auditor consent is required. Filing fees are also not due until the S-1 prospectus is filed.

To understand how popular the confidential submission is, let’s look at the number of IPOs filed by Emerging Growth Companies in the past four years. The table below presents a breakdown of the number of DRS filings (SEC form that companies are required to use to file confidentially) by year.

As we can see from the table, most of the eligible companies are taking advantage of the ability to file the initial prospectus on a confidential basis. In 2013, 131 out of 173 total IPOs made by EGCs (about 76%) had at least one DRS filing. The percentage went up in 2014, as 189 out of 211 total IPOs made by EGCs (or 90%) had confidential submissions. In 2015, the percent of confidential submissions dropped to 85%, yet in 2016 it went back up to 89%. Interestingly, some companies had as many as five confidential filings before finally submitting an IPO prospectus that was available to the general public.

One question that triggered our curiosity is why any company would choose to opt out of the confidentiality provision. At least on the surface, the confidential submission does not appear to have any strings attached.

There is still some argument on whether confidential submissions indeed facilitate growth or if they just open a backdoor to stealth IPOs. Yet, one thing is clear; given the popularity of the provision with EGCs since it was introduced, non-EGC companies are very likely to take advantage of this new provision.