Based on a high volume of interest following our recent Q2 IPO blog, we decided to do a follow-up analysis of IPO auditor market share outside of the Big Four firms. 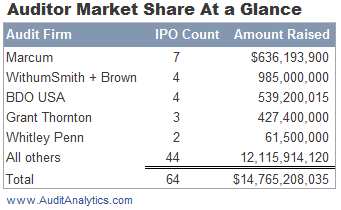 WithumSmith + Brown and BDO USA share second place with 4 IPO audit clients each. Of the above firms, WithumSmith + Brown’s clients raised the most, bringing in $985,000,000.  Although not on this list for IPO count, Moss Adams was the auditor for the top company of the quarter, Byline Bancorp, Inc., which raised over $2 billion.

Overall, we have seen increased activity for the first half of the year compared to last year. The total number of IPOs almost doubled and the amount raised has already surpassed the total amount raised during 2016 by over $3 billion.