Last week, news came out that the SEC was investigating Boeing Co. for possible irregularities in the company’s long-term contract accounting.

(Bloomberg) The U.S. Securities and Exchange Commission is investigating whether Boeing Co. properly accounted for the costs and expected sales of two of its best known jetliners, according to people with knowledge of the matter.

The probe, which involves a whistleblower’s complaint, centers on projections Boeing made about the long-term profitability for the 787 Dreamliner and the 747 jumbo aircraft, said one of the people, who asked not to be named because the investigation isn’t public. Both planes are among Boeing’s most iconic, renowned for the technological advancements they introduced, as well as the development headaches they brought the company.

Underlying the SEC review is a financial reporting method known as program accounting that allows Boeing to spread the enormous upfront costs of manufacturing planes over many years. While the SEC has broadly blessed its use in the aerospace industry, critics have said the system can give too much leeway to smooth earnings and obscure potential losses.

Boeing makes adjustments to its contract and program accounting estimates every quarter. These adjustments can cause massive swings in net income. In the following table, we show Boeing’s adjustments over the past two years. 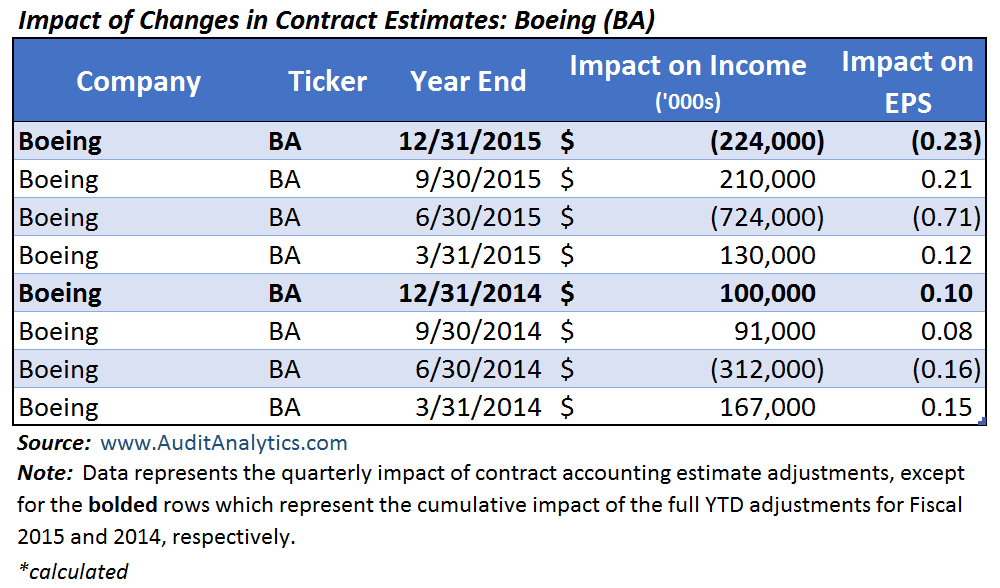 Clearly, these are critical and significant estimates, and it’s no wonder that the SEC might be interested in them.

However the Boeing affair turns out, it is perhaps a signal of where the SEC is turning its focus. This is only the latest in what appears to be a string of SEC investigations into such accounting. There have been comment letters, restatements, shareholder lawsuits, and/or investigations at L3 Communications, KBR, Computer Sciences, and others.

We have looked at long-term contract accounting before. There is no question that it is a complex form of accounting, and one that is rife with difficulties – for both companies and their auditors. In that previous post, we found that in one quarter, five of the leading defense contractors all met or beat earnings estimates thanks to the impact of changes in accounting estimates related to the percentage-of-completion method.

Boeing is not alone in recognizing substantial adjustments to these estimates on a regular basis. The table below presents the most recent cumulative YTD adjustments for a select group of companies. 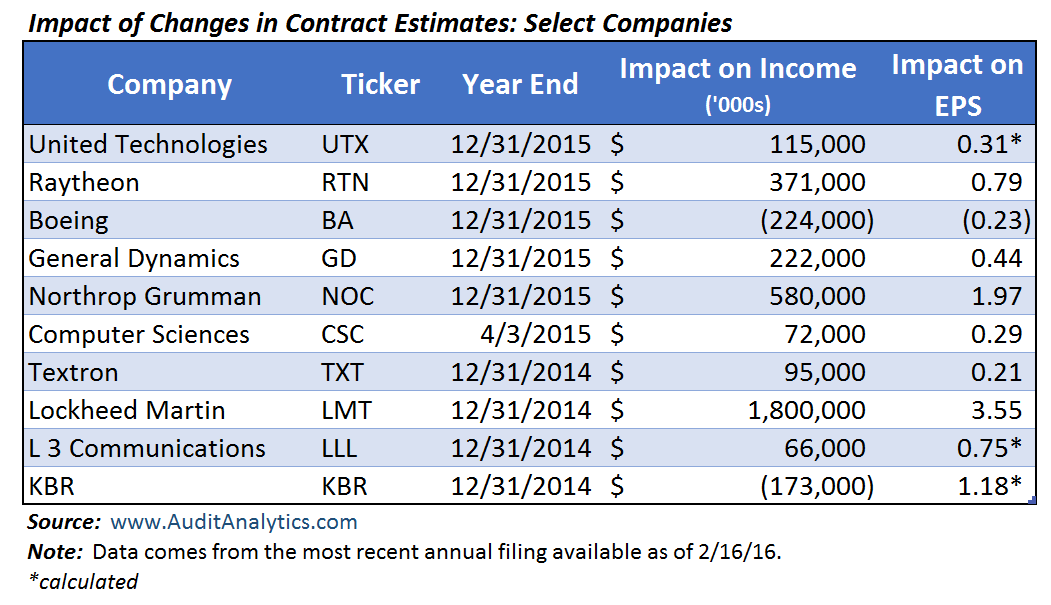 The potential impact of these changes in estimates is huge. In Fiscal 2014, Lockheed Martin recognized an adjustment of $1.8 billion, or $3.55 per diluted share. And, as one can see from the table above, these estimate adjustments routinely go over eight figures.

As we said at the time, it is important to note that we are not suggesting these companies are guilty of direct earnings management. Rather, we are merely pointing out the inherent risk in the percentage-of-completion method, which is deeply reliant on very uncertain estimates. Schilit and Perler, in their classic book on accounting gimmicks, note that this method of revenue recognition is notoriously difficult to get right, and the nature of the method allows for ample “wiggle room”, even under GAAP. Revenue under this method is an especially high-risk area: hard to account and even harder to audit.

Perhaps new regulatory and enforcement standards are on the way.