In one of our recent posts, we noted that the average SEC comment letter conversation for 2014 consisted of 3.9 letters and lasted 48 days, significantly less than the 5 letters and 86 days we calculated for 2010.

In this blog, we attempt to provide additional insight into the materiality of comment letters by looking at the longest of these conversations, and those that took an unusually long time to resolve.

For each of the years 2006-2014, we selected the company that had the most letters in a single conversation. As we can see from the table above, the most expansive conversation to date originated in 2008; it took Radian Group 33 letters and 396 days to complete the SEC’s review of their filings. For 2006, Holobeam and Tricell shared 1st place, with 21 letters each.

Why are some conversations settled quickly while others can take many times longer? In the table below, we provided a snapshot showing the distribution of issues discussed for all ten companies in the sample. (To see the complete list, please contact Audit Analytics.) 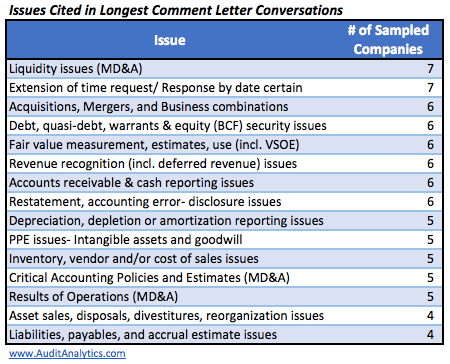 The distribution of issues is very different from what we saw in our previous blog. This is not surprising, since the companies in the sample are exceptional by definition. Yet, some interesting patterns can be detected. Of note is that seven of these companies needed an extension of time to respond to the SEC letters, which, in turn, made the conversations longer. Further, as we can see from the table, six companies received at least one letter in which the SEC inquired whether their accounting treatment of certain transactions was in error (“Restatement, accounting error – disclosure issue”).

Management of Holobeam, Inc. (the “Company”) determined on April 21, 2006 that our balance sheet and statement of shareholders’ equity for fiscal year ended September 30, 2005 and the three months ended December 31, 2005 incorrectly reported the minimum liability for the unfunded accumulated benefit obligation of the Company’s defined benefit plan. As a result, we will restate the balance sheet and statement of Shareholders’ equity by $221,285 and report as a separate component of stockholders equity a decrease to stockholders’ equity and a pension liability by the same amount.

The restatement was triggered by a lengthy comment letter conversation, at the end of which Holobeam agreed to file restated financial statements:

This is to confirm that Form 10-K for the year ended September 30, 2005 will be revised to record an additional minimum liability for the cumulative effect of the additional minimum pension liability related to the 2004 plan year which amounts to $94,831, net of tax. Form 10-K for the year ended September 30, 2005 and the first quarter form 10-Q for the three months ended December 31, 2005, will be corrected by amendment.

China Housing, Tianyin, LBO Capital, and Autobytel also had to restate following an SEC review. For Soupman, however, the discussion was focused around a certain 10-K disclosure that turned out only to be a typographical error:

Response: In our Annual Report for the year ended August 31, 2012, we recorded accrued interest as part of our debt; for the quarter ended November 30, 2012 we reported the debt and accrued interest separately; therefore we reclassified our year end 2012 comparative numbers to conform to our quarterly presentation.

There was no restatement. This was a typographical error.

Comment letters that discuss restatements can typically be broken into two categories: letters that question whether a particular accounting treatment is justified; and letters that request further clarification about restatements or errors that were already disclosed. We did not dig deeper into the analysis to determine whether one kind or the other has a noticeably longer average conversation. We would think, however, that first type – comments that question accounting treatment – would in general be harder to resolve, and that these conversations are likely to be longer.

Of course, not all letters in the first category ultimately result in a restatement; for example, many companies are able to provide sufficient evidence that their accounting treatment was in fact justified, or that the errors are immaterial and therefore no revision is required. At any rate, conversations that raise doubts about proper accounting appear to be longer and harder to resolve.

Notes:
1. The analysis is based on 10-K and 10-Q filings for the years 2006-2014 and is based on the year of origination.
2. 2014 data is based on a download of the Audit Analytics database as of May 2015, and may not be complete due to delays in dissemination date of the comment letters.
3. For 2014, mCig, Inc. had the longest conversation with 25 letters, but we excluded this company from the analysis since most comments focused on 8-K rather than 10-K or 10-Q disclosures.