As we discussed in one of our previous posts, the number of SEC comment letters referring to issues in 10-K and 10-Q filings decreased about 25% in the first half of 2014, compared to the same period in 2013. But what about previous periods: is this decline part of a more meaningful multi-year trend?

The chart below depicts the total number of comment letters by the year of origination.1 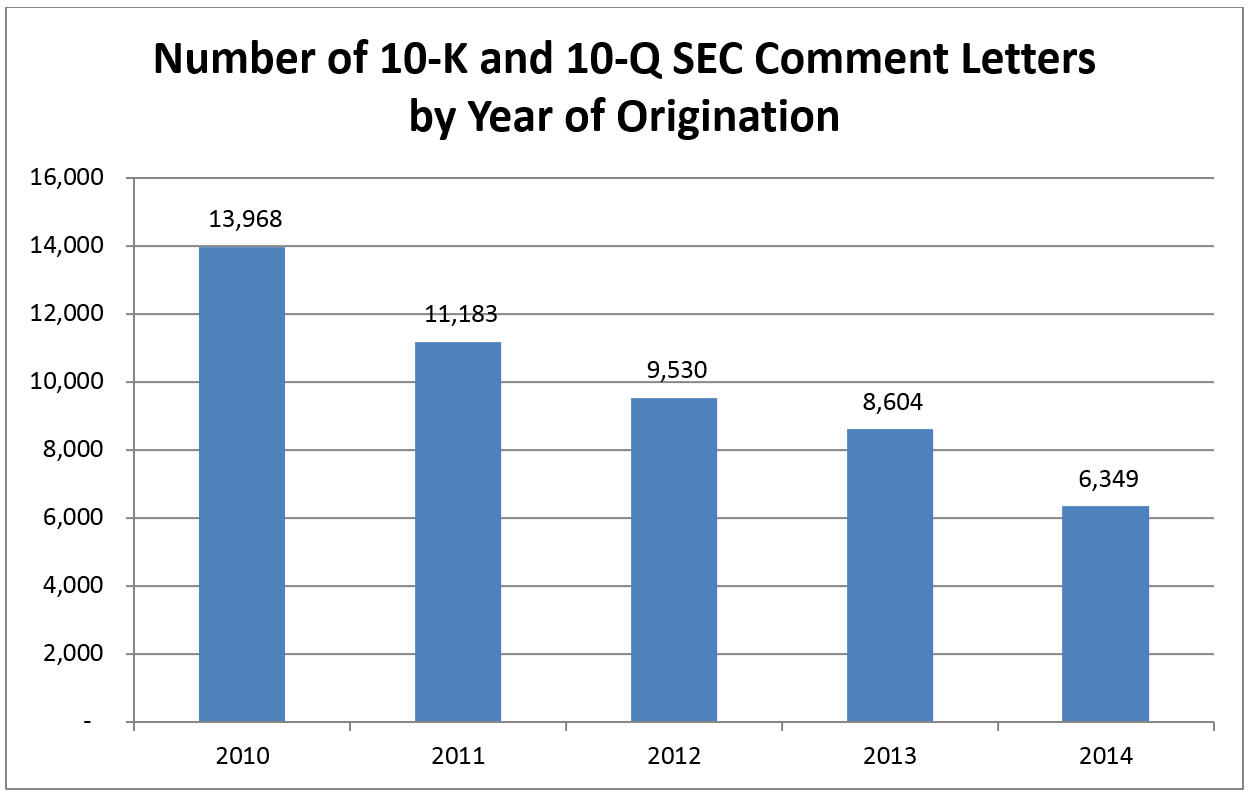 What does this tell us about the SEC’s comment letter activity? It’s hard to say. There are many factors that come into play in evaluating this trend.

The Sarbanes-Oxley Act of 2002 requires the SEC to review the financial statements of every public company at least once every three years, while permitting more frequent reviews as needed. According to its 2013 annual report (Table 1.2 on page 44), the SEC reviewed the financial statements of at least 52% of corporations. By that measure, it was the regulator’s busiest year out of the past six. But if so many companies were reviewed, then why did the number of comment letters decrease so significantly?

One thing to consider is that, while the filings of many companies may get reviewed, comments are issued only if concerns or ambiguities are found. If nothing stands out in a filing, then such reviews may not result in any comment letter at all. If for some reason the SEC were finding fewer or less complicated issues to comment on, then that could be one factor contributing the decrease. We consider this possibility in the second part of this post.

Further, the analysis above focused solely on 10-K and 10-Q disclosure. Given the rising number of IPOs and the inherent complexity of registration requirements, it is possible that more resources are being directed towards the review of registration statements. If that were the case, then we would see an inverse trend in the number of comment letters addressing issues in registration filings. We intend to look into this possibility in a future article.

Lastly, some letters that originated in 2014 might not yet have been released at the time our research was conducted. Conversations are normally made public only after all comments have been resolved. In particular, dissemination delays would affect longer, harder to resolve conversations. As a result, the final count of 2014 letters may change as we progress through 2015.

Audit Analytics also looked at other indicators that may shed some light on the materiality or significance of  comments. Is there any indication, as we suggested above, that comment letters reveal a decrease in the number and complexity of the issues being raised in such letters?

To provide some insight into this question, we looked at two metrics: (1) average number of days to complete conversation, and (2) number of letters per conversation. The rationale for the first metric is that complex, harder to resolve comments may trigger follow up questions from the SEC, in which case they would take longer to resolve. The rationale for the second metric is self-explanatory: more letters back and forth imply more questions and deeper penetration into the issues.

Consistent with the general trend seen in the first figure, both metrics declined significantly between 2010 and 2014. In 2010, the average Number of Days to Complete Conversation was 86. By 2014, the average number of days to complete had dropped to only 48 days. Over the same period, the average Number of Letters per Conversation declined from 5.0 in 2010 to 3.9 in 2014. We are not sure what this means, but it may imply that the SEC is operating more efficiently, or perhaps that comments are becoming more routine and easier to resolve.