Corporate income taxes continue to be a hot topic in the news, especially with the recent controversy surrounding inversions. At the center of many of these debates are the foreign earnings that multinational companies claim to be indefinitely reinvested. Such earnings are not subject to U.S. income tax, and there seems to be plenty of evidence that companies are taking advantage of this fact to minimize their tax provisions.

Back in the spring, we explored a rising trend in foreign indefinitely reinvested earnings as reported annually by Russell 1000 companies. In our report, we noted that such earnings nearly doubled from 2008 to 2013.

With the topic fresh in the news again, we thought it would be interesting to sift through the data once more and look at the subset of companies that have re-domiciled to Europe. Since most of the companies in our analysis have fiscal years ending around 12/31, there is not much to add in the way of an update to those indefinitely reinvested foreign earnings balances. Instead, we thought it would be interesting to look into the looming impact of the mandatory auditor rotation standard that was recently approved in the EU.

Among the Russell 1000, there are 23 companies that meet the following criteria: (1) active filer as of 2013, (2) at least one observable reported indefinitely reinvested foreign earnings balance at year end, and (3) has re-domiciled to any of the thirty-one EU/EAA Member States. For comparison, the Congressional Research Service (CRS) determined that there have been 47 “corporate inversions” or “expatriations” over the last decade. And, although the CRS population is not an apples-to-apples comparison to our population, it is interesting to note that roughly half of the 47 companies identified by the CRS also domiciled in Europe.

We limited our geographic focus to the 31 EU/EAA Member States affected by EU Regulation 537/2014 so we could investigate a hypothetical analysis of the mandatory auditor rotation requirements our population of 23 companies will face.1 Part of Regulation 537 dictates that mandatory auditor rotation shall begin in 2016 (i.e. two years after the Regulation went into force on June 17, 2014). This new legislation is intended to improve the quality of statutory audits across the European Union. The objectives driving Regulation 537/2014 include augmenting the independence of statutory auditors, enhancing the instructive aspect of the audit report, and improving independent auditor supervision.

Regulation 537/2014 defers to the definition of a public-interest entity as outlined in Article 37(2) of Directive 2006/43/EC. This definition is summarized in brief as:

In addition, the rules set forth under Regulation 537/2014 apply to any entity (including a subsidiary of a US company) that meets the definition of an EU public-interest entity. 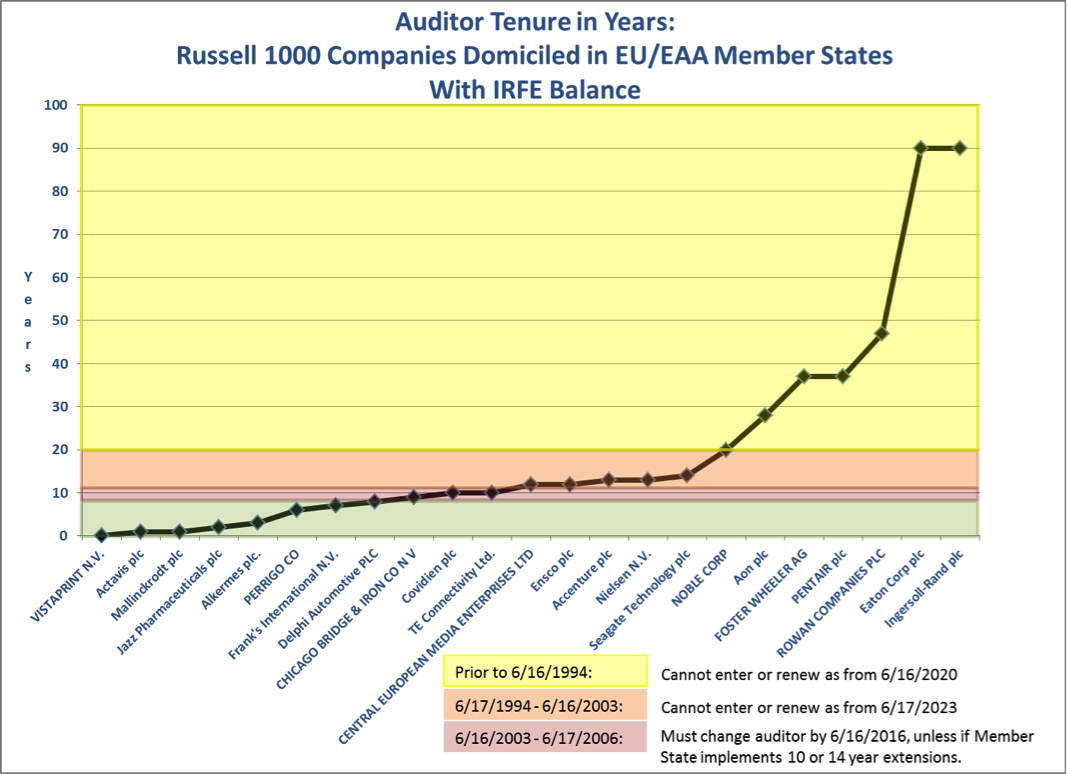 In the chart depicted above, we can now visualize where particular companies fall within the transition periods outlined in Regulation 537/2014. The companies falling within either the yellow, orange, or red bands would qualify for one of the transition periods outlined above in Article 41(1), Article 41(2), and Article 41(3), respectively. Entities falling within the green band, such as Vistaprint N.V. or Perrigo Co., would be required to proceed with a competitive auditor tender at the completion of the maximum duration allowed by an applicable Member State. The average auditor tenure for this population of 23 Russell 1000 companies with at least one IRFE balance reported over the six-year time span amounts to 20.4 years, with a median of 12 years.

In September 2012, we issued a report titled Auditor Tenure, CFO Tenure & Audit Committee Analysis – Research on 5 European Union Markets. We thought it would be interesting to investigate whether companies comprising the FTSE 100 would display a similar line chart as the one depicted above for our subset of the Russell 1000. The following chart depicts auditor tenure for FTSE 100 component component companies. (Note that only a subset of companies are noted along the horizontal axis due to space constraints.) 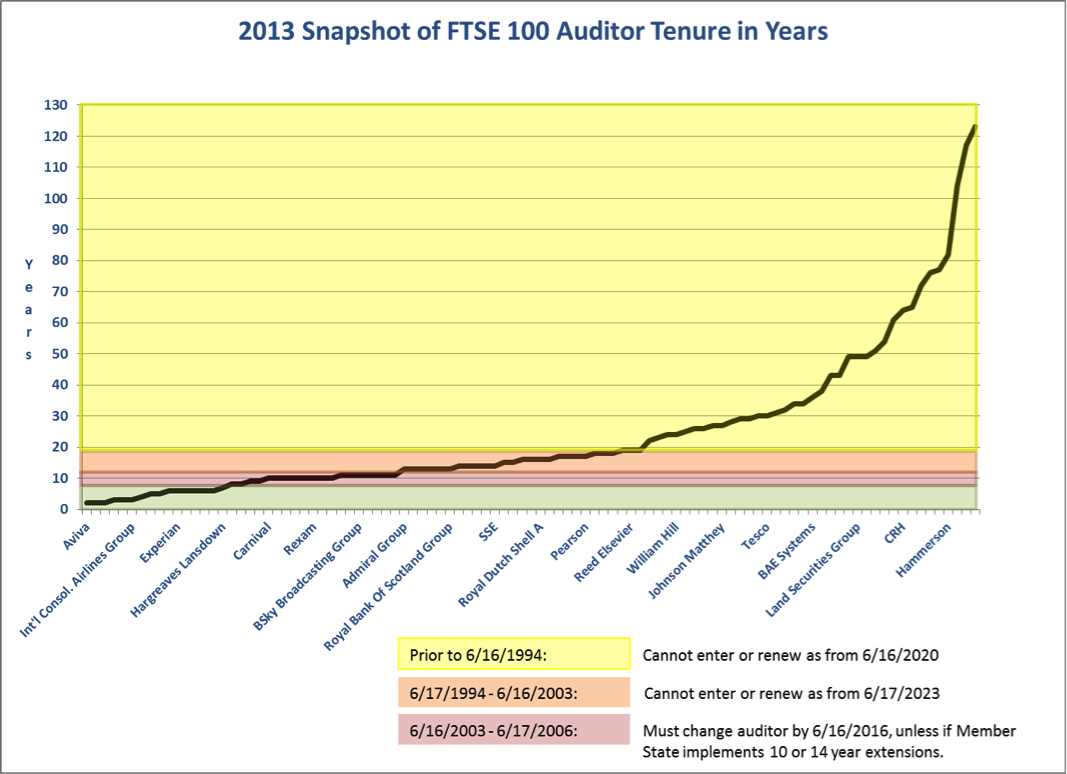 Since the chart above was based on auditor tenure data as of 2012, the pattern would look quite different now that several members of the FTSE 100 have tendered new auditors. In fact, the accounting world saw numerous FTSE 100-firm auditor changes in 2013 and 2014, including financial heavyweights HSBC and Barclays.

1 Regulation 537/2014 is not limited to the 28 EU Member States, but also includes the three additional members (one of which is provisional) of the European Economic Area.