On August 15, 2014 Alibaba Holding (BABA) disclosed accounting irregularities in one of its units – recently acquired Alibaba Pictures (formerly known as China Vision Media Group). The announcement did little to affect the company’s valuation. About a month later, on September 19th, BABA debuted on NYSE with valuation of $25 billion, making it the largest IPO in history.

Publicly traded companies are used to a high level of scrutiny. Their financial reporting is subject to rigorous rules and regulations that are enforced by the SEC. Private companies, on the other hand, while often subject to similar rules, may enjoy a certain amount of leeway thanks to their relative obscurity.

So what happens when a private company goes public? It is, in a sense, similar to the rise of a new pop diva or a hot shot politician – all of a sudden, all eyes are on the supernova, and not even the minutest detail of their past is left uncovered. Likewise with an IPO; the private company’s books, which were once privy to only a small number of people, are opened up to the world – and especially the scrutinizing eyes of the SEC – like so much dirty laundry.

As part of the registration process, the SEC reviews the company’s filings with intense detail, investigating everything from the company’s description of its business to its accounting for revenue. Perhaps unsurprisingly, this review process leads many companies to amend or rewrite sections of their public disclosures.

Indeed, many companies uncover accounting errors in their pre-IPO period, probably thanks to the fresh eyes looking over the books. Combining data from our Restatement and IPO modules, since 2008 there have been 77 restatements that were disclosed in the registration prospectus filings of companies that eventually went public. 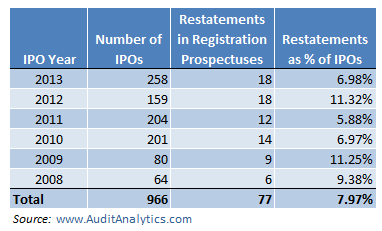 As a rule, the SEC goes over each and every IPO prospectus and issues comment letters to clarify various points. For some companies the comments are more or less benign, while for others the comments can expose real issues in internal controls, accounting, or business practices. On the other side, the independent auditors will perform extremely detailed audits prior to the filing of the prospectus. This helps to clear up any errors before going public.

Many errors identified in the table above may be attributed to the SEC’s pre-IPO process. For instance, Kayak disclosed that it made mistakes in the calculation of the redemption value of its redeemable convertible debt.  The error was uncovered by SEC in the process of pre-IPO prospectus review.

Here is an excerpt from an SEC letter to Kayak, which contained over 60 comments and questions:

58. We note that the carrying amounts of your redeemable preferred stock on your balance sheets do not reflect the accumulation of dividends or the accretion of the redemption amount. Please tell us how you are accounting for your redeemable preferred stock including your consideration for the guidance in ASC 480-10-S99-2 and paragraph 15 of ASC 480-10-S99-3A. Additionally, please revise your footnote to include the required disclosures under paragraph 24 of ASC 480-10-S99-3A.

We note the Staff’s comment and respectfully submit that the Company considered the characteristics of its redeemable convertible preferred stock, including its rights and privileges, in accordance with the guidance set forth in FASB ASC 480, and as a result, the Company has restated its financial statements included in the Registration Statement to reflect the accrual of such dividends. We also advise the Staff that the Company has revised its disclosure on page F-21 to clarify that the related redemption amount equals original issuance price plus accumulated dividends. The Company further advises the Staff that the liquidation payment is only due upon a liquidation or change in control and accordingly, the Company is not accreting to that amount as such events are not deemed probable.

This restatement did little to change investors’ perception, however. The stock soared 30% on the first day of trading to close at $33.18, bringing the value of the company to $1.2B. Five months later the company was acquired by Priceline for $1.8B – a further 50% premium.

Going public is usually a long, arduous, and complex process. It appears as though investors and regulators understand that there will be some “bumps” along the way, while the company’s reporting gets brought up to the standard of a publicly traded company. Accounting errors discovered during this phase do not appear to have much effect on investors’ perception, and therefore the stock price.

In the words of Hank Greenberg, “As is typical at this stage of a newly public company’s life, the only thing anybody cares about is that earnings don’t miss. Or that the company doesn’t guide below expectations. Or that something — anything — doesn’t come out of left field to derail the story. It’s all about the story. And the last thing anybody cares about is earnings quality…”