In the new audit reform published last year by the EU Commission, one of the interesting stipulations includes a cap on fees for permitted non-audit services (NAS). Going forward, fees for non-audit services cannot exceed 70% of the average of the entity’s audit fees over the past three years.

2.  When the statutory auditor or the audit firm provides to the audited entity, its parent undertaking or its controlled undertakings, for a period of three or more consecutive financial years, non-audit services other than those referred to in Article 5(1) of this Regulation, the total fees for such services shall be limited to no more than 70 % of the average of the fees paid in the last three consecutive financial years for the statutory audit(s) of the audited entity and, where applicable, of its parent undertaking, of its controlled undertakings and of the consolidated financial statements of that group of undertakings.

As Member States, auditors, and companies prepare for these new laws to take effect next summer, Audit Analytics answers the question: how would U.S. companies measure up if a similar 70% fee cap was imposed in the United States?

Using our extensive databases on audit and non-audit fees, Audit Analytics compared 2014 NAS fees (including audit-related, tax-related and other fees) to a three-year average of audit fees for 2012-2014 for each of the Russell 3000 companies.[1] 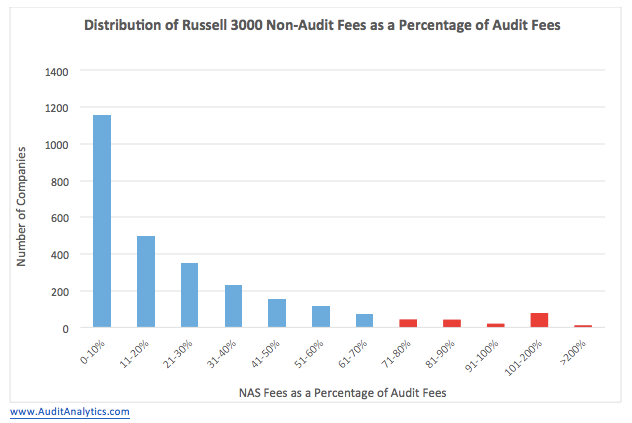 Our analysis showed that just under 200 companies would exceed a 70% cap for NAS fees, with some notable examples surpassing 200%. The vast majority of companies fall below the 70% mark. More than a third of the companies analyzed had NAS fees under 10% of their average audit fees. An examination of these entities reveals that a variety of factors can affect the percentage of NAS fees, sometimes dramatically on a year-by-year basis.

A second factor that raises the percentage for NAS fees is a major change in the company, including mergers, spin-offs, and business acquisitions. For example, Corindus Vascular Robotics, Inc. [CVRS], topped the charts with NAS fees at 339% of its average audit fees. Despite an audit fee average of $148,000 it had NAS costs in 2014 of $502,000. The fee disclosures in its 2014 10-K explain that the audit-related fees “include accounting consultations and regulatory filings associated with the reverse merger transaction.” The prior year, the Company had incurred only $4,200 of NAS fees. Likewise, for E. I. du Pont de Nemours and Company [DD], NAS fees rose to $24,100,000 in 2014 in connection with a proposed spin-off, among other things. This resulted in NAS fees of 165% of its average audit fees. In 2013, its NAS fees (amounting to $6,200,000) were only 43% of its average audit fees.

As these examples indicate, NAS fees can change dramatically year-by-year. Rocket Fuel Inc. [FUEL] presents an extreme example of dramatic change. In 2014, the Company’s NAS fees were 176% of its average audit fees. According to its 2014 DEF 14A, $1,855,615 in NAS fees (disclosed as “All Other Fees”) “consist[ed] of consulting services rendered in connection with mergers and acquisitions due diligence and the integration of [the] acquisition of X Plus Two Solutions, Inc. in 2014.” The prior year, NAS fees amounted to only $74,408, only 6% of its average audit fees.

In all, the data shows that the ratio of NAS fees to the average audit fees is relatively low for the vast majority of companies in the United States. More than 90% of Russell 3000 companies had 2014 NAS fees that would fall below the 70% fee cap as applied in our analysis. The few that exceed the cap appear to do so only in one year – not recurring year after year – due to significant one-off transactions.

Assuming that the situation in Europe is similar, one likely consequence of the EU regulation, then, is that the statutory auditor of companies going through similar substantial transactions may no longer be able to provide services related to those transactions.

[1] As PwC explains, in EU audit reform: Providing non-audit services, “The cap calculation is very complex and for most groups, it will not be possible to calculate the cap from publicly disclosed financial information. Market commentators might ignore the complexities of the calculation and make a simple comparison of disclosed audit fees to disclosed non-audit fees in order to perform a crude assessment of cap compliance.” We calculated average audit fees for the past three years and compared 2014 non-audit fees to the result. The analysis was limited to Russell 3000 companies that disclosed audit fees for each year in the period.

[2] In the EU Regulation, tax services are generally prohibited NAS for the auditor but may be allowed by Member States under certain conditions. (See Title II, Article 5.)