So, if TIO business is now worthless, why did PayPal write-off only $30 million and not the entire value of the acquisition?

To answer this question, let’s look at how the acquisition accounting works. When one company acquires another company, the purchase price is first allocated to the target’s tangible and intangible assets and liabilities based on the fair value. Any money in excess of the acquisition price is allocated to goodwill, which could be seen as the value of synergies expected to be realized in the future by the acquirer.

But what if there is a problem with the deal – let’s say synergies never materialized or even worse, the acquired company lost a major customer or a key patent litigation? In this case the acquiring company may have to take an impairment and write down assets.

Tangible and non-goodwill intangible impairments are easy to understand: if business conditions indicate that the assets may generate less revenue than the value of the asset, the asset may need to be written down.

Goodwill impairments are more complex. In the past, companies were required to measure fair value of individual assets and liabilities prior to recording a goodwill impairment. On January 26, 2017, the Financial Accounting Standards Board issued ASU 2017-04, which simplifies goodwill impairment process. The standard goes into effect in 2020 for calendar year-end filers.

The new guidance makes financial reporting easier because it eliminates the need to determine the fair value of assets and liabilities of the reporting unit. Instead, if a business unit’s fair value is less than the carrying amount in the books, goodwill impairment needs to be recorded.

Going back to the TIO example, the data breach presented substantial new information indicating that the value of the customer-related intangible assets could be impaired – so PayPal correctly wrote it off:

“As a result of the suspension of TIO’s operations announced in November 2017, we performed a test for recoverability of the customer-related intangible assets acquired in connection with our acquisition of TIO in July 2017. The test involved comparing the intangible assets’ carrying values to their future net undiscounted cash flows that we expected would be generated by the intangible assets. Based on the results of this test, we recorded an impairment charge of approximately $30 million in depreciation and amortization in our consolidated statement of income, which was measured as the excess of carrying value over the estimated fair value of the assets. The calculation of the estimated fair value of these customer-related intangible assets is based on the income approach utilizing a discounted cash flow methodology. Following recognition of the impairment charge, we will amortize the adjusted carrying amount of those assets over their remaining useful life.”

“We also determined that the suspension of TIO’s operations did not indicate that the fair value of the reporting unit the TIO goodwill was assigned to would be below its carrying amount.” 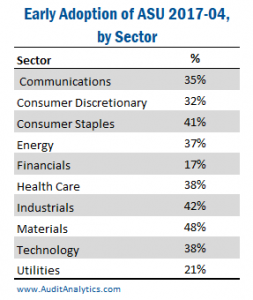 It is worth noting that PayPal early-adopted ASU 2017-04 in January 2017. Although the rule goes into effect in 2020, FASB allowed companies to adopt the new standard earlier, and about third of the S&P 500 companies did so.

Breakdown of early adoption of ASU 2017-04 by sector is in the table to the right.

That’s not a surprise since the standard is expected to mostly benefit companies with underappreciated assets.

So, in a way, could non-goodwill impairments be an early indicator that some of the charges (such as goodwill attributed to bad acquisitions) are still hidden?

The top five companies are below: 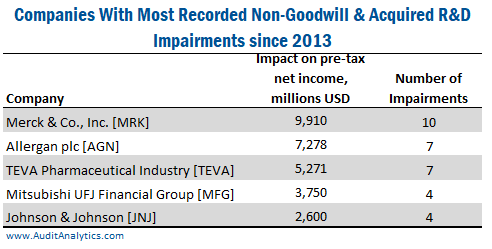 Not surprisingly, 3 out of 5 companies are in the healthcare sector – at the time of the acquisition, it is very difficult to predict which R&D projects would work. Arguably, for a large company that grows through acquisitions, a complete lack of impairments may raise an eyebrow – as we noted above, it is expected that at least some of the acquisitions would not work as planned.

PayPal is just one example of what analysts need to consider when seeing impairments on balance sheets. Because of how accounting works, when there’s an impairment of acquired intangible assets but goodwill is not mentioned, it is possible that goodwill was not written down. This is especially important in cases where carrying value of the reporting unit is close to the fair value – making future impairment charges more likely. In conclusion, when analysts see impairments for intangible assets they should be wary that other unknown liabilities may be lingering on the balance sheet.

A modified version of this article was first available to subscribers of our Accounting Quality Insights.

For subscription information, or for information on additional companies with non-goodwill intangible and acquired R&D impairments, please email us at info@AuditAnalytics.com or call (508) 476-7007.