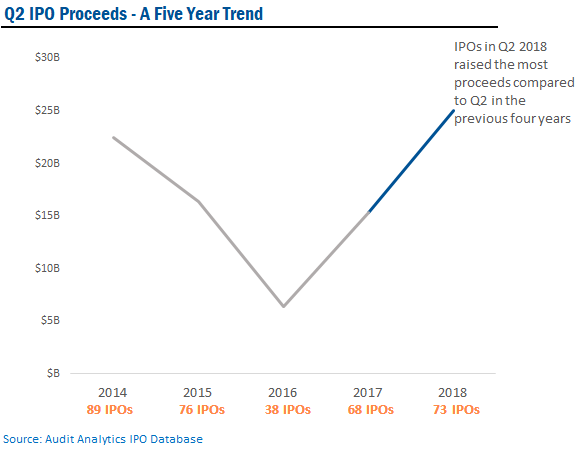 Despite the increase in number of IPOs and amount raised this quarter, none of the IPOs were among Russell 1000 and 2000 companies.

Interestingly, this IPO was not your traditional IPO. Spotify Technology S.A. was the first company to IPO through Direct Listing. In February 2018, the SEC approved the NYSE proposal to permit companies to use direct listing method for the IPO. Direct Listing allows smaller companies to IPO without having an underwritten offering, according to a recent case study conducted by Harvard Law School. The shares are not sold from the company, but from the shareholders directly.

Pharmaceutical Preparation Manufacturing (NAICS 325412) with thirteen new IPOs, had the most number of transactions this quarter, raising over $1.4 billion.

Another great quarter for IPOs. The upward trend continues.

Audit Analytics tracks IPOs, auditor changes, audit fees, private placements, and many other items related to the audit, regulatory, and disclosure intelligence. For subscription and pricing information, email us at info@AuditAnalytics.com or call (508) 476- 7007.