The peer group that a company chooses is an important factor in corporate governance. As compensation consultant Pay Governance LLC recently noted in an article posted by the Harvard Law School Forum on Corporate Governance and Financial Regulation, “the vast majority of companies target their pay opportunity levels and stock grants to the median of their carefully selected and highly scrutinized peer groups.”

Just how carefully selected and highly scrutinized are those peer groups? Generally, peer groups used for benchmarking are selected to reflect the target company in some way. Peers usually include close competitors or companies of a similar size, stature, or geographical location.

As we did last year, we analyzed the self-identified peer groups filed in recent DEF 14As and put together a list of those companies most frequently named as a peer by other companies. 3M, Honeywell, and Eaton were again cited as a peer by quite a few companies. Their popularity, according to research firm Equilar Inc., is largely attributed to their “breadth of operations or easily comparable company size”.

Except for newcomer Graco, we see only minor changes compared to last year’s analysis. Nine of the top companies that were most frequently cited as peers are classified as manufacturing companies; but really they are conglomerates, with operations ranging from food and beverage to pharmaceuticals to vehicle parts. A majority of these companies have been public since at least 1965, while Honeywell and General Mills date as far back as the 1920’s. Between their size and longevity, it is no wonder these companies are popular peers.

One objective of benchmarking is to align long-term shareholders’ interests with compensation practices. Surprisingly, however, a recent study by the Wall Street Journal found little correlation between executive pay and annual corporate performance. None of the year’s 10 highest-paid CEOs ran one of the 10 best-performing companies. (Although, one wonders whether lower compensation levels would have meant an inability to attract top CEOs, which in turn would have led these companies to underperform by an even wider margin.)

Despite the appearance that year to year compensation does not always reflect a company’s immediate performance, selecting peers is especially important in cases where companies benchmark against their peers’ stock performance. Take Nucor Corp for example, whose peer group has a direct impact on its executives’ compensation.

Of the companies we analyzed, the typical peer group, including performance and secondary groups, consisted of 19 peers. This trend aligns with the methodology used by Institutional Shareholder Services (ISS), where a peer group generally contains a minimum of 14 and a maximum of 24 companies. 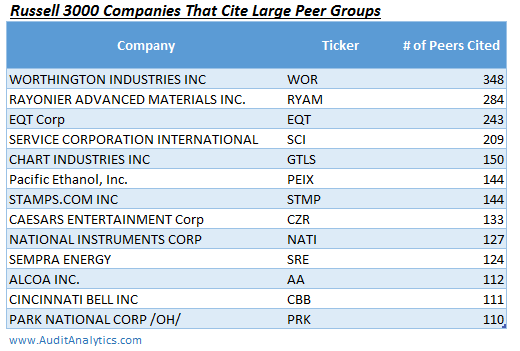 In choosing to use such a large group, the proxy for Worthington Industries states that the compensation committee did so because…

“…using this broad-based comparator group minimizes the effects of changes to the group due to changes in data base participation, lessens the impact a single entity can have on the overall data, provides more consistent results and better reflects the market in which the Company competes for executive talent.”

On the other hand, some companies such as Regal Entertainment Group and Werner Enterprises prefer smaller groups, naming only two and three peers, respectively. Werner, keeping things simple, elected not to retain a compensation consultant and instead selected three direct competitors in the transportation industry that are most similar in operation and size (by revenue and market capitalization).

There are even some companies, such as the Hackett Group Inc., that choose not to benchmark at all. The employment agreements for its named executives do not provide guaranteed increases to base salaries, and as such, Hackett Group has not raised base salary since 2010. Instead, compensation largely reflects the company’s performance.

“The Company’s annual incentive program reflects the Compensation Committee’s belief that a significant portion of the named executive officers’ compensation should be tied to company performance.”

Of course choosing not to raise base compensation is not necessarily a negative indicator. Robert Half International Inc, in an effort to emphasize performance-based compensation, has not increased base salaries for named executives since 1998. Still, in March 2015, the company ranked first in its industry on FORTUNE® magazine’s “World’s Most Admired Companies” list and has appeared on that same list annually since 1998.

Choosing whether to benchmark or not does not lock a company into doing it that way year after year. Cherokee Inc has benchmarked in previous years but chose not to do so for Fiscal 2016 because they felt simply that it was not needed.

Mike Rourke at Meridian Compensation Partners notes that in anticipation of the new pay ratio requirement, effective Jan 1, 2017, approximately 40% of participating companies have already either calculated the ratio or have begun the process of calculating the ratio (e.g., attempting to identify the median employee). The amendment requires companies to report the ratio between the CEO’s and the median employee’s compensation. The challenges of implementing this requirement, to name just a few, include gathering data from global subsidiaries and overseas divisions and dealings with restrictive data privacy laws in some of the countries.

Whatever else can be said, it seems that shareholders are satisfied overall with executive compensation plans. As Mr. Rourke notes, “shareholder support of executive pay programs remains very high, most often with over 90% voting in favor of such proposals.”

1. In response to a WSJ article about peer groups, citing Audit Analytics data, EQT Corp said that they actually benchmark against 25 energy companies,  but also looks at 200+ companies “to see where the compensation of its directors, along with its CFO and general counsel, stack up against similarly sized companies from a broad group of industries.”↩