The second quarter of 2016 had a slight increase in SEC-client auditor change activity from the first quarter. Marcum LLP, based in New York, held the top spot this quarter, with eleven wins and two losses, for a net increase of nine new clients. As we noted recently, Marcum also had a good quarter picking up new IPO clients.

Deloitte, BDO, RSM, and Crowe Horwath also gained clients this quarter. Notably, BDO is back to its winning ways, after breaking even last quarter.

The table below presents a comprehensive view of the gains and losses for major global and national firms. It shows how many SEC audit clients each auditor gained or lost, and also the auditor from or to which the client was won or lost. 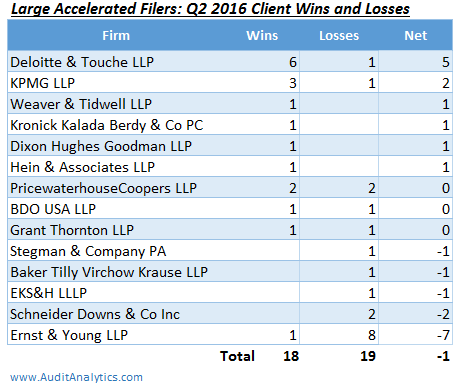 The next table presents a sample of the most wins and losses for Accelerated Filers, which are companies with public float between $75 million and $700 million.

Finally, the last table presents the top four firms with most wins and losses for Smaller Reporting Companies.

The California-based Anton & Chia lost 23 Smaller Reporting Company clients, despite having acquired McCormack, Su & Company Inc. during the period. Reviewing the 8-Ks associated with those changes, it looks like Anton & Chia voluntarily resigned from most of them. As noted by Accounting Today, many of those dropped clients were picked up by KCCW Accountancy, which contributes to why that auditor claimed second place for most wins among the Smaller Reporting Companies this quarter.