In his State of the Union address early last week, President Obama indicated that he wants to bring indefinitely reinvested foreign earnings back, to be invested in American operations.

So let’s make that decision easier for more companies.  Both Democrats and Republicans have argued that our tax code is riddled with wasteful, complicated loopholes that punish businesses investing here and reward companies that keep profits abroad.  Let’s flip that equation.  Let’s work together to close those loopholes, end those incentives to ship jobs overseas, and lower tax rates for businesses that create jobs right here at home.

Back in May, we published a report on Foreign Indefinitely Reinvested Foreign Earnings, noting that such earnings rose each year from 2008 to a peak of nearly $2 trillion in 2012.1

The table below shows the top 20 companies from 2012 with foreign indefinitely reinvested earnings. 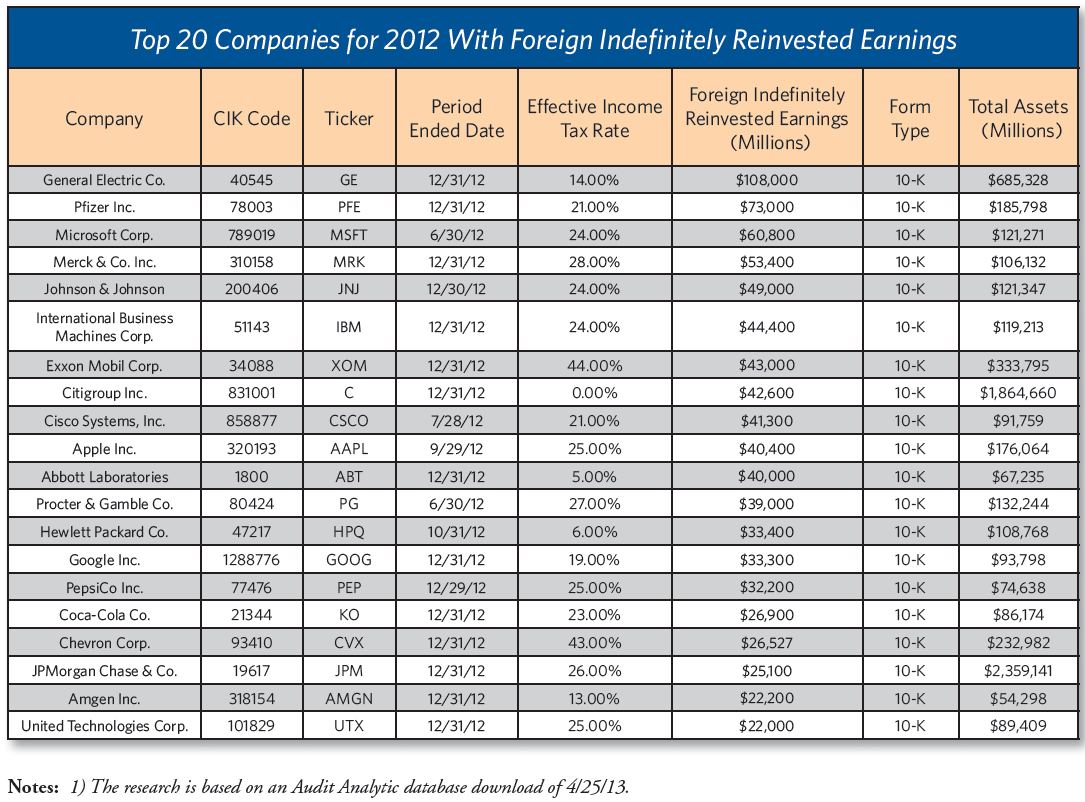 As one can see, the amount of foreign earnings that stay over seas is pretty staggering.

We wonder what President Obama’s plan might entail. For the sake of comparison, consider the American Jobs Creation Act, which President Bush signed into law in 2004. One provision of that law was a one-time deal that allowed companies to “repatriate” these foreign earnings at a significant tax discount. This proved to be very popular for the companies that took advantage of it; 843 companies repatriated a total of $362 billion between 2004 and 2006, according to the New York Times.

This repatriation no doubt created some small boost to the US economy, but it’s hard to imagine that $362 billion made more than a blip in overall economic trends.

Indeed, as we noted in our 2013 report, immediately after the AJCA repatriation provision expired, foreign indefinitely reinvested earnings skyrocketed, as shown in the table below. The overall increase from 2008 to 2012 was $800 billion, an increase of 70%.

We don’t usually make comments about policy here, but if President Obama is serious about bringing foreign earnings home, a more permanent change to the tax code would be required. Recent history suggests that companies will continue to amass foreign indefinitely reinvested earnings, and that a one-time change likely will not have long-term effects.

1. Analysis based on annual filings of the Russell 3000.~