There were 60 initial public offerings in U.S. markets between January 1, 2018, and March 31, 2018. These IPOs raised over $17.7 billion for the quarter, an increase of almost $5 billion from last quarter and approximately $5.5 billion from Q1 of last year. 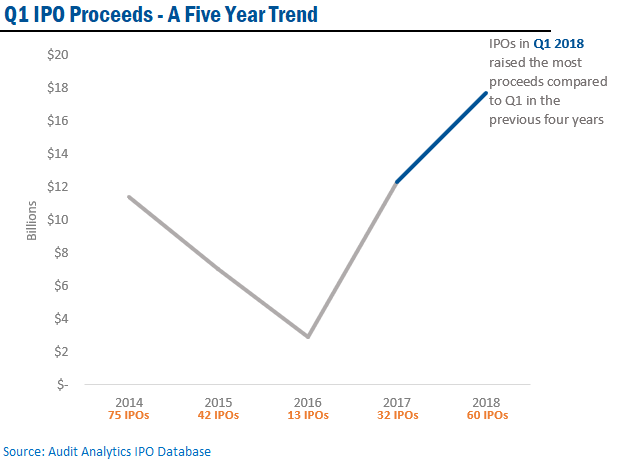 PagSeguro Digital Ltd., a payment service company in Brazil (NAICS 522320), raised the most this quarter, bringing in $2.3 billion, after going public in January, according to Investor’s Business Daily.

Pharmaceutical Preparation Manufacturing (NAICS 325412) with ten new IPOs, had the most number of transactions this quarter, raising over $781 million.

The Big Four audited 57% of the IPO market.

As seen in the table below, PwC had 13 IPO audit clients, the most for all firms in Q1. Ernst & Young had 12 IPO audit clients that raised over $6.1 billion, the highest amount raised this quarter.

Overall, a strong start to 2018, both in the number of IPOs and the amount raised.

Audit Analytics tracks IPOs, auditor changes, audit fees, private placements, and many other items related to the audit, regulatory, and disclosure landscape. For subscription and pricing information, email us at info@AuditAnalytics.com or call (508) 476- 7007.