The PCAOB’s May 2015 release of its Audit Committee Dialogue provides audit committee members of publicly traded companies with insight into concerns that have consistently arisen in discussions between audit committees and auditors over the past few years. In addition, the PCAOB identifies areas which are emerging as potential risks to be addressed by audit committees and their auditors.

The examination of over 650 audit firms across six global networks revealed four main areas of concern which have consistently appeared during the years evaluated. These areas are categorized as internal control over financial reporting (ICFR), material misstatement risk assessment and response, accounting estimates (including fair value), and deficient “referred” work performed by one auditor but used by another. 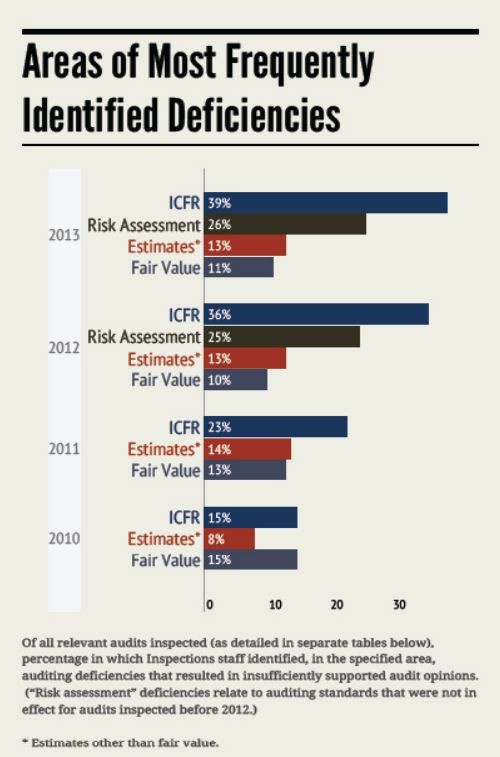 examined. Since 2010, deficiencies in audits of ICFR have increased from 15% to 39% among the population inspected. This is an alarming trend, as ICFR audits appear to be increasingly not accomplishing their intended objective of detecting material weaknesses before a material misstatement occurs.

The second common topic of concern discussed is that of deficiencies in assessing and responding to risks of material misstatement, particularly related to auditing revenue. During both 2012 and 2013, one quarter of all audits inspected were identified as failing to comply with risk assessment standards. The PCAOB emphasizes that changing risks should consequently change audit plans, and auditors should be proactive in identifying changes which may alter a company’s risk environment.

The third significant area of concern discusses auditing accounting estimates, including fair value measurements, and their disclosures. Deficiencies in auditing accounting estimates ranged from 8% to 14% over the four years evaluated. Deficiencies in auditing fair value measurements ranged from 10% to 15%. Both sets of deficiencies resulted in insufficiently supported audit opinions and are still significant areas of concern.

Lastly, as seen in the table to the right, the PCAOB 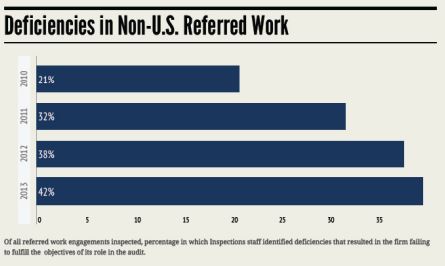 found that deficiencies in referred work in cross-border audits has doubled from 2010 to 2013. While inspecting audit firms in 45 non-U.S. jurisdictions in 2013, the PCAOB concluded that more than 40 percent of referred-work engagements of the six network firms appeared to have significant problems. These deficiencies were ultimately relied upon to produce the issuer’s consolidated financial statements, which led to material misstatements and inaccurate opinions.

After discussing existing areas of audit risk concern, the PCAOB addressed areas of growing concern. First, the PCAOB identifies a significant increase in the number of mergers and acquisitions as a potential area for audit risk concern. Engagement teams may not have the experience to handle such situations properly, due to previously low levels of activity in this area. Second, the fall of oil prices is a growing concern for the PCAOB. Regardless of industry, the decline of oil prices poses a risk of material misstatement for companies. The PCAOB plans to examine how auditors approach this emerging risk. Third, the PCAOB discusses undistributed foreign earnings and potential risk related to income tax accounting. In attempts to minimize domestic tax responsibility, U.S. public companies collectively hold more than $2 trillion in indefinitely reinvested foreign earnings. Finally, the PCAOB is concerned over potential risks due to the expansion of non-audit services provided by audit firms. The recent growth of consulting services provided by large audit firms could have an effect on the firms’ attention to audit quality. In order to avoid this danger, firms must carefully manage growth in the area of non-audit work.