The figures published by Shearman & Sterling LLP, as seen below, show that the number of SEC enforcements spiked in 2011 and 2012, likely due to the lag between the 2009 crash and the time it takes to bring an enforcement action forward. 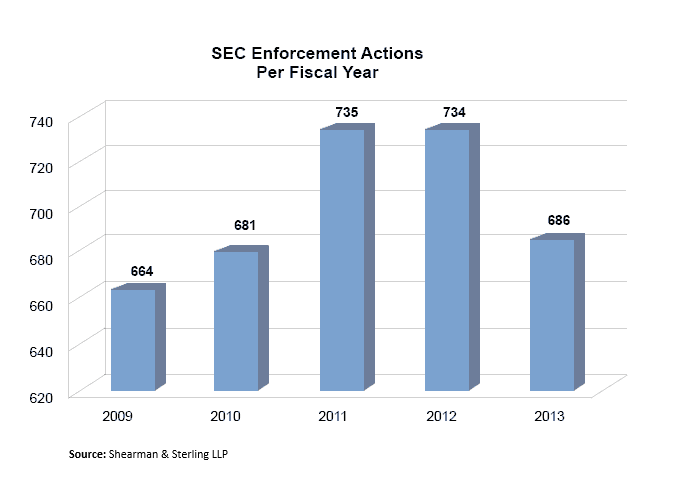 In October 2013, Chair White discussed this approach by referencing the “Broken Windows” theory, during remarkets at a Securities Enforcement Forum. White explained, “the theory is that when a window is broken and someone fixes it – it is a sign that disorder will not be tolerated. But when a broken window is not fixed, it ‘is a signal that no one cares, and so breaking windows costs nothing.’”

In light of the Goldman Sachs cases involving ABACUS, it has been proposed that the sheer number of enforcements alone is not a good enough indicator of the SEC’s ability to police the market. The table below presents an analysis of cases that the SEC open and closed between 2010 and 2012. A counter-intuitive trend emerges from the data: the quicker a case was settled, the larger the average settlement. This suggests that companies may be willing to settle large cases in an attempt to avoid admitting wrongdoing or criminal indictment. A quicker settlement may also make it harder for other stakeholders to bring a lawsuit against the firm.

Settlements are important for companies, especially in the banking and financial industry. “A criminal indictment could close a bank,” according to former federal prosecutor Jacob Frenkel. “That is why we see more and more financial institutions – banks, brokerage firms and hedge funds – prepared to add zeros to the left of the decimal and pay for the right to remain in business.”

Settlements are also important to the SEC, which must make efficient use of its limited resources. Further, settlements have to be approved by the courts in order to ensure that the settlement is fair for all sides.

For years, these settlements have applied the “Neither Admit nor Deny” Policy in which companies settle an enforcement action without admitting nor denying any wrongdoing. White has looked to revise this policy in order to force companies to either admit fault during the settlement of enforcement or go to court and risk an unfavorable ruling. In either case, companies will likely have to acknowledge a greater amount of responsibility. If enacted, the revised policy should give the SEC a new method for evaluating the effectiveness of SEC enforcement actions: watch the trend in the number of companies admitting wrongdoing.