The Sarbanes-Oxley Act of 2002 requires the SEC to review the financial statements of every public company at least once every three years, while permitting more frequent reviews as needed. According to the SEC 2013 Annual Report, the agency reviewed financial statements of at least 52% of corporations and 34% of investment companies (Table 1.12 on page 44 of the report). The document states that “The volume of disclosure review helped deter fraud and assured that investors had access to relevant information about emerging issues.”

According to Audit Analytics data, the SEC issued 6,166 letters that referred to 10-K and 10-Q filings to companies with market cap of at least $100 million in 2013. That represented a decrease of about 4.5% from 2012, when the SEC sent 6,408 letters to similarly sized companies. The number of companies on the receiving end of those letters was consistent with that trend: 1,552 companies received such letters in 2013 compared to 1,609 in 2012. It is important to note, however, that, since comment letters are made available to the general public no earlier than 20 days after completion of the review process, the final count for 2013 may change as more letters posted on EDGAR.

In the analysis below, we provide a breakdown of major issues that were subject to SEC review in 2013 for 10-K and 10-Q filings. 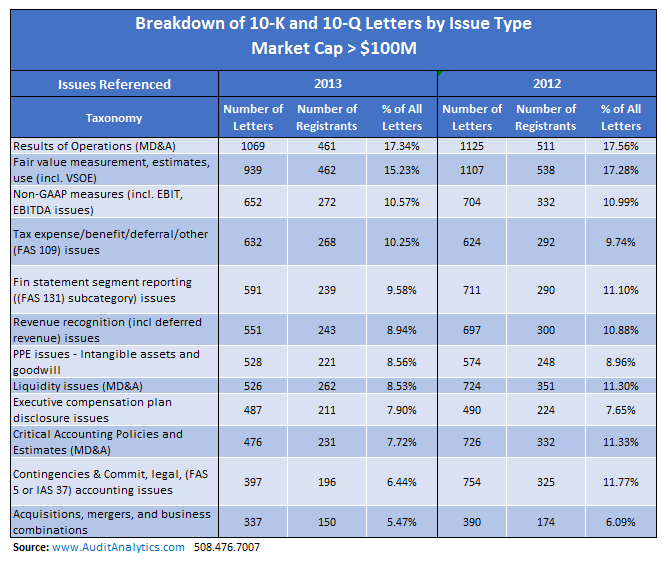 The table above presents the major topics covered in SEC Comment Letters during the past two years. Most of the topics that were common in 2012 pop up again in 2013. Executive Compensation topics were slightly more prevalent in 2013 letters (7.9% of all 10-K/10Q letters in 2013, compared to 7.65% in 2012). On the other hand, the share of letters referring to Legal Contingencies and Critical Accounting Policies declined significantly (6.44% and 7.72%, respectively, in 2013, compared to 11.77% and 11.33% last year). The table presents an overview of the most commonly addressed issues in SEC correspondence.

In addition to looking at the big picture, we have also identified a number of more specific trends that may affect individual industries and/or sectors. In this blog we show some examples of such lesser trends.

Subsidiary Guarantor Financial Information: In the past few years, the SEC frequently commented on the applicability of Rule 3-10 of Regulation S-X. In 2013, at least 50 companies received letters referencing this rule. Types of questions included: requests to disclose percentage ownership of a parent over a subsidiary; presentation of separate subsidiary financial statements; and clarification of allocation of assets and cash flow between subsidiary guarantor and the parent. In cases of material errors in presentation of subsidiary guarantor financial statements, the SEC frequently required companies to restate financial statements. Here is an example of such a letter.

Comment: Please confirm that by wholly-owned subsidiary you mean 100% owned as required by Rule 3-10(c) of Regulation S-X, and propose revised disclosure to be included in future periodic reports. Otherwise, tell us why you do not provide separate financial statements for the issuer. Also, please address the disclosure requirements in Rule 3-10(i)(9) and (i)(10) of Regulation S-X and provided proposed disclosure, as applicable.

Comment: We note that you identify several components of derivative fair value income for derivatives not accounted for as hedges, including three categories of realized gain or loss that you indicate had been reported as another component of derivative fair value income labeled ‘change in fair value of derivatives that do not qualify for hedge accounting’ prior to settlement. Tell us why you believe these items accurately portray the accounting required by FASB ASC 815-10-35-2, and do not constitute non-GAAP measures as defined in Item 10(e)(2) of Regulation S-K, if this is your view.

Internal Controls – New COSO Framework Letters: On May 14, 2013 COSO issued an updated Internal Control – Integrated Framework. In 2013, the SEC issued comments to the companies which did not clearly state whether the company had used the updated framework or the original 1992 one:

Comment: Please tell us how use of a separate legal entity provides a more advantageous legal structure for the administration of your gift card program.

Response: The Company is a Delaware corporation. Delaware law requires entities domiciled in Delaware to escheat to the State of Delaware the unredeemed value of gift cards where the address of the owner is unknown and the card is over 5 years old. The entity that administers the Company’s gift card program, is a Virginia limited liability company. Virginia law does not currently require this escheatment, which allows the Company to retain the unredeemed value of gift cards.

These are just some of the areas of focus we have noticed in our analysis of SEC comment letters. Our database covers over 223,000 comment letters that have each been reviewed and categorized according to our proprietary taxonomy of almost 3,000 issues and regulations.

Note 1: Fair Value Taxonomy include questions referring to applicability of ASC 820, as well as fair valuation of assets during acquisitions, fair valuation of goodwill and valuation of stock options under ASC 718.
Note 2: The Critical Accounting Estimates Taxonomy is used only if explicitly referenced in the title or in the body of the comment.
Note 3: Selection of more than one taxonomy is common for certain types of comments. For example, comments requesting additional information about the impact of repatriation of foreign taxes on liquidity would obtain both the “liquidity” and “taxes” taxonomies.